Comb Jellies in the Oslofjord

It's hard to gaze out over a still blue sea and the pine tree covered hills, listening to the morning birds and realize that it's the last time we'll see this place for another year. These little islands are enchanting. They're just smooth grey rocks in the middle of the sea, formed by ice millions of years ago but they seem alive, like a pod of basking whales. The color of the Oslofjord changes with the weather and minute-by-minute. Weathermen are unable to pinpoint the macroclimates and the temperatures and rains fluctuate hourly. The weather is never correct but we gaze at Tonsberg's Blad and CNN regardless with vain hope of planning for the following day. My grandfather used to say that the bad weather which came from the south would split at Verden's Ende (the World's End) at the bottom of this island, not sure which way to go, and thus divided, float miraculously on each side of Tjome, so that it would always be warm and sunny. Sometimes we find ourselves at the divide of the bad weather; we can see blueness and floaty fairweather clouds to the south and dark purple anvil clouds to the north. In the middle, the sea is an enigmatic white, neither one nor the other, almost like a portal place.

As I write, a black crow, a veritable Edgar Allen Poe raven, is sitting on the hedge that the Maharishi so gamely chopped ("it needs another six inches off" he is fond of saying every night as we sit outside with a glass of wine. "Yes dear" I say, every night.) staring at me, quizzically. A large bag of trash containing delicious prawn shells was left outside last night. I've already cleaned it up but he's waiting for me to go inside so he can return to his feast. He's cocking his head to the left and looking at me with one eye, or so I imagine, about to speak.

And the light, too. My insomnia is a blessing to me here. How does anyone sleep in a place where it is light and beautiful so early in the morning. How many pictures will I take of the sky at sunrise before I tire of it, the melon sky, shot with blue? Time is marked by meals only. Otherwise there would be no time, just other places to slip through into this otherworldliness.

It is good that I live with the Maharishi, a dedicated consumer, for if not, I fear I would slip way into flower-collecting, berry-picking Moominland. 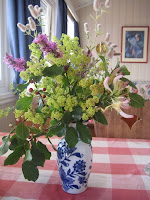 Rose hips, big fat red ones from wild fuchsia roses, white and yellow honeysuckle, yellow and scarlet rowanberries, rosebay willowherb, tendrils of burgundy Virginia creeper, & white gorse filled the vases in the house last night. And a sprig of tiny morello cherries. I went out in the rain after a day inside of telling jokes and playing Scrabble ("Mamma and I both look hideous when we laugh hysterically" said Minks, cheerfully, as I wiped away the tears from hearing yet another terrible swine flu joke) with a raincoat and a pair of scissors, and found all of these things on the short stretch of lane between our house above the public dock, to our jetty. "Hello, Mormor" said my cousin as I returned with handfuls of Norwegian flora. Queerly, I feel flattered by this. My grandmother, as I have said before, was the sane, nature-loving version of Big Edie when she summered on the island. The gloves and hat returned as soon as she was in the city.

The hedgerows are full of raspberries too. Archie & Daisy will have a raspberry picking competition today, so that jam can be made (the best, sweetest, yummiest jam in the world). The winner will get a chocolate gold medal, with blue and white ribbon that my brother found at Spar.

Scavenger hunts can be educational. This I have discovered. Yesterday's questions ranged from the historical (What are the full names of both of your Norwegian great grandparents?) to the botanical (Find a blueberry, a raspberry, a strawberry, a wild mushroom, a stalk of oats) to the mathematical (How many steps on the diving platform at the public swimming beach?) to the geographical (Name the two large islands to the east connected to Tjome by bridge). And they provide very good exercise. The three older children (15, 14, 12) in sneakers and raincoats ran back and forth from the jetty to the woods to the wheatfields beyond to find the answers to the questions. Like the Tour de France, they were very close, divided from first place to last by a mere half point. None of them could find a wild mushroom, strangely. I see magic mushrooms every time I walk across a stretch of grass. Minks was the winner with 7 ¼ points out of a possible 10 and she had her picture taken, proudly, in her gold medallion. Runners up received bags of sour worm candy, an appropriate prize, I thought, for such a rainy, slug-filled day.

Poor Jack, our dear friend (who, I've just discovered via a breathless text message, has taken up the trapeze) spent two whole weeks here when it rained every day (so much for my grandfather's optimistic weather theory) and complained that he had never, in his life, seen as many enormous, fat slugs. There is boundless green, to be sure, and so the slugs and snails do not want for much. 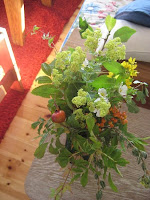 Honeysuckle and raspberries vines are bursting through the fence on to the deck where I sit with my crow. They are not planted. Nor invited. But we are happy to see them. My mother pots geraniums and petunias and herbs at the back of the house. Gentle hum of bees, a crow in the silver birch, seagulls further out at sea, the gentle sound of lazy waves lapping at the shore, a cow in the distance, the clink of a mast and the twittering birds: this is all there is now, before the house is awake. Why would one leave this?

The 12yo boy discovered comb jellyfish alongside the brenmanets, tiny translucent jelly molds flecked with phosphorescent light, mini lightbulbs shimmering in the ocean, so tiny that you can lose them if you look away for a moment. He thought they may be the box variety (the ones that kill you with one sting in a matter of minutes) and every time I was about to dive in, saw another one in my path. But something about the Oslofjord, the fresh blue sea, makes you want to take your life in your hands. It beckons you like a siren: Come plunge into my coldness. It's the Viking blood perhaps.

Oh and the children thought of an excellent premise for a horror movie: Vampire Jelly Fish.
Posted by Miss Whistle at 11:25 PM

What an exquisite post about an extraordinary place set apart. I wish I could have been there, but now almost feel I have been—thank you! Hope you're now having a grand time in England. L.A. misses you!