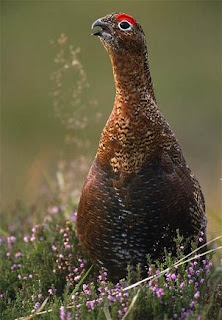 One loses all sense of time in Los Angeles. Or, rather, one loses the ideas of the English seasons and the things we use customarily to mark them. Such as, the Glorious 12th. Today is the first day of the grouse shooting season. As children, we'd be dragged through the heather with my father, my mother and various gun dogs, in knickerbockers, scratchy socks waiting for the lunch hut, the tins of shandy in the burn, the floury baps, slathered with thick butter and home-baked ham. Or the promise of a nap or an elicit read of a favorite paperback in one of the stone butts. My brother loved it. He was in his element on the moors, and now, of course, he lives on one in the Angus Glens. I was a horribly un-shooty child. Life for me was better on a horse.

But the 12th is an important day. Grouse are shot and sent down to the smart London butchers on the first plane of the day so that they can be eaten that evening. Apparently most of the birds my father and his chums shot would end up in a grand London butcher shop. I always pictured Harrods with its cold, grey slab marble, copper hanging hooks and shopping ladies smelling of Joy. Most years we were in Scotland on the 12th. We traveled on the 11th, which was my mother's birthday, stopping at a pub near Perth for chicken in a basket, waving at the horses in Amulree, making our way to Kenmore and the beautiful Loch Tay and Ben Lawers. My mother's birthday was often celebrated this way, in transit, and her birthday dinner became a big welcome celebration of all the guns and their wives arriving. We had apple-pie beds to makes, potatoes to put in exhaust pipes, alcoholics to be shut in drinks cupboards. And so my dear Mamma's birthday was somewhat overshadowed. But she never said a word (it's that war generation -- buck up and carry on). 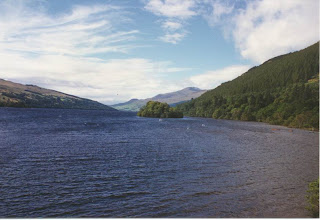 Loch Tay & Remony
James Prosek talks about losing track of time in nature or when in his studio engaged in the creative process. This, I believe is the good loss of time. The kind I'm experiencing is that you forget what's going in the world because of the cacophony of ephemera. The stuff being hurled at you. The loud noise of the internet, the television, the radio, the blaring car horns and drivers with their middle fingers in the air, the over-airconditioned supermarkets with yet another cut price special, the constant hamster-clawing treadmill of money and stress and anxiety and blah blah blah.

My friend is in Nantucket and in a letter to her I expressed the fantasy of an October walk through a damp east coast or European forest, foraging for mushrooms, which could later be used in a Boeuf Bourgignon (Julia Child's books are flying off the shelves after the incredible response to the divine "Julie & Julia"). It's not the place, perhaps, but the time, or not the time, but the mood, but there is something very loud and dry and brown and awful about Los Angeles in August, even though the winds are blowing through, keeping the weather clement and Mediterranean "just like Santa Barbara" as my friend Alex points out.

Even the thought of stomping, red-faced, as my awkward 13 year old self, through deep, old purple heather, seems better, somehow, than this vacuum cleaner we call home. Yesterday, for example, we couldn't see the Perseid meteor showers because of "light pollution."

A nice roast grouse with bread sauce and game chips sounds pretty good right about now.
Posted by Miss Whistle at 11:29 AM

As a child growing up in hot, brown, vacuum-cleaner Los Angeles, how I would have loved to join you for a Glorious Twelfth—even though I'm sure I, too, would have been an un-shooty child, preferring an illicit book-read. Thank you for a beautiful introduction to the parallel universe I missed.