Angst in the ether

I can't tell whether the weekend was strange due to the myriad steroids and antibiotics I'm swallowing, or whether things would have popped on their own, as they do, explosively, when you leave them well alone for too long. The elephants never really move out of the room. They might shift about a bit, lean on one leg or another, survey the view, but sadly, they're too big to exit the door. Steroids make you loopy, tired, strange. Strange in your own skin, for sure. They make you want to sleep and when you sleep you dream fever dreams and wake up heavy and otherworldly.

The Maharishi and I aren't in sync, not by any euphemistic stretch of the imagination. Our dance is jarring, atonal, set in two different minor keys. And despite our little cozy nest in the woods, with its weeping eucalyptus and grey olive trees, the blighted tomato vines and the jolly electric-pink geraniums, there is angst as heavy as Thomas Mann's hanging in a pall over the canyon house.

And so I blame the pills.

A director once said that you can shoot a scene that you have written, but if you shoot it on Tuesday, you can't avoid incorporating everything that happened to you on that Tuesday preceding the shooting of the scene. And that the same scene would be very different if it were shot on Wednesday.

I didn't write about 9/11 on Friday because it felt as if everything that could have been said, was said, and that adding one's personal anecdote to the great cloud of them floating in the ether would be similar to Madonna's eulogy of Michael Jackson: she made it all about her. But one thing did strike me. The New York Times' David Carr wrote: From David Carr at the NY Times:

"The jumpers will always be with us. September 11 a brutal, final Hobbesian choice followed by endless falling." 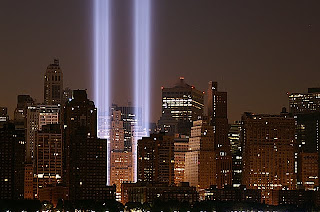 
And I posted this to my Facebook page. A few people commented. One said:

"That image haunts many here still ... many of whom felt themselves falling in their own ways for a long long time afterward."

I wonder for how long we will feel the repercussions of that day. Its impact, as an astute dinner guest said last night, reverberates in concentric circles,

It sounds to me like its time for a ladies' evening...