The Roman Polanski case is making me furious. 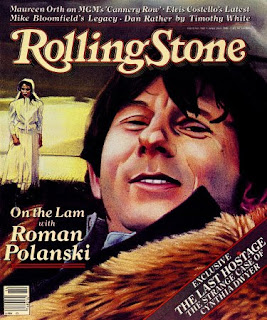 I am the worst kind of debater. I feel empathy for everyone's position and end up not knowing where I stand. (Which is the opposite of the Maharishi, who majored in Rhetoric and, annoyingly, can debate anyone under the table. In fact, he will make you feel bad for ever considering the position that you hold.)

With this case, I couldn't be further away from wishy-washy. I find it hard to grasp exactly what the Polanski supporters' argument is. And I've come to the conclusion that the argument is genius trumps child rape*. (LLG also discusses this topic on her blog here and as we've discussed it together, I hope she won't mind me also weighing in on the subject while I'm righteously indignant.) Let me illuminate: If Polanski were a transient, his treatment would be completely different.

I have always believed that crazy is okay if people are brilliant. I have used it to defend hideously abusive men, filmmakers too, in fact, not for crimes anywhere near the one we're discussing here, of course, but I've done that snobbish thing. It's really so Hollywood. "Honey, you gotta forgive the bad behaviour -- the man's a genius."

Well, I was wrong too. There is absolutely no excuse.

Polanski's parents were both thrown into concentration camps, where his mother subsequently died. In 1969 his wife, Sharon Tate, was murdered, brutally by Charles Manson. This is more tragedy that any man should ever endure. He has made some extraordinary films. My favorite is "Chinatown," but he's also responsible for "Rosemary's Baby," "Tess" and "The Pianist" which won the Palme D'Or and the Oscar for Best Director.

However, in 1977 he drugged and sodomized a thirteen year old girl. That would be a child one year younger than my own daughter. (And yes, there are so many questions one asks about that day, especially "Where the hell was this child's parent?")

He has been a 'fugitive' ever since.

A couple of days ago Polanski was arrested at the Zurich Film Festival and is to be extradited back to the US. Many artists and filmmakers, such as Woody Allen, Martin Scorsese, David Lynch, Harvey Weinstein and a bunch of other Hollywood folks have signed a petition in his defense.


*a theory I first espoused on my Facebook page early yesterday morning, to which my friend Josh replied: "what a disgusting comment on our society... and oh so poignant..."
Posted by Miss Whistle at 5:10 PM

I heard a caller on KPCC the other day say the following about the Polsanki case:
"I'm a cement contractor, and if I did what he did no one would feel sympathetic for me because I'd put down hundreds of perfectly constructed foundations."
While I feel sorry for Polanski, he is a confessed criminal and a fugitive. He deserves to be held accountable.

This seems like a simple case and hard to believe that outstanding work in your profession should, in any way, mitigate a need to be held accountable for a crime. It seems to me that some people in Hollywood are allowing their sympathy for him to muddle their logic and for that, I feel sorry for them.
There is no excuse for having sex with an underage minor - period. What is hard to understand about that? It does not matter that he was in mourning, it does not matter what happened to his family, however tragic, it does not matter how good his films were, are, or will be, he had sex with a minor - not someone he thought was 18 and was 17 1/2, but a 13 year old - that is a crime.
What is clear, from his behavior, is that he is a wussy of a man who does not want to take responsibility for his own admitted behavior. It is embarrassing to think of this person manipulating a child into sex and when the adults show up to have him account for his behavior he runs away. To me, that says it all.

Gorgeous Bumble, you know this filmmaker feels the same way as you do. I love that Steve Lopez article too -- he was one of the reasons I had to write my own position down too cause it has left me feeling as frustrated as you are. And I also feel something surprising -- a strange sense of peace and harmony -- that at least he is having to do even a little time -- right now -- for the crime he plead guilty to. I also feel like when you and I and all your readers who comment expose the absurdity of this free pass for artists, it's a very good thing this all happened right now.

REAL AND HONEST LOVE SPELL CASTER WHO RESTORED MY BROKEN MARRIAGE I don’t really know how to thank Dr Jumba enough for what he has done for me. My husband left me and went back to his mistress for months. If not for the intervention of wiccalovespelltools@gmail.com , I wouldn't have gotten back my husband. His powerful reunion love spell brought back my husband the last day he finished his spiritual prayers with his Gods and oracle . I doubted him at the beginning but I realized with faith nothing Is Impossible. Thank God today I am among the people who testify about Dr Jumba for his good work done that restored peace back to my marriage. I will forever be grateful to God of Dr Jumba. I suggest to anyone who needs help to get In touch with Dr Jumba now through his Email ID; [wiccalovespelltools@gmail.com] or call or text him on WhatsApp +19085174108 website : https://drjumbaspellhome.wordpress.com