The Horse & the Chiropractor

The horse, a very handsome black thoroughbred/warmblood cross, with shades of pinto (a map of Italy on his belly, a white foreleg) came to me through what can only be described as serendipity. Fred was lame and I had nothing to ride. Horse arrived snorting through pink nostrils and looking at me with fiery eyes. He'd been from trainer to trainer, competing in the jumpers because his lineage boasts grand prix horses, but no-one, it seems could fall in love with him because he was, well, just too hot for an amateur. Being a glutton for punishment, or idiotically fearless when it comes to horses, I thought the horse would be a lovely challenge. The first time I rode him, I could hardly break out of a trot. The second time, trotting a cross-rail (cavaletti) was a problem. Peso saw bogeymen in the bushes, ghosts in the jump standards, was incredibly sensitive to any touch (he would leap forward if I lent forward to touch his neck) and although this isn't a Taming the Wild Stallion through the power of faith story, it began to feel like one. 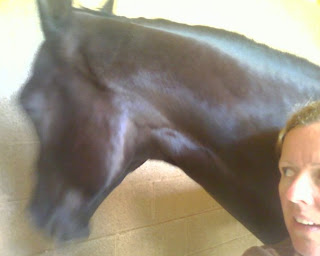 We spent a lot of time bending, doing circles, working on lateral movement. We tried bridle after bridle, bit after bit -- a gag, a hackamore, a simple snaffle and finally a slow twist snaffle with a flash noseband (I think this is what the English call a 'grackle'). We vetted him, he was sound. We vetted him again, this time with a bit of ritzy vet who suggested that he may be more comfortable in a belly girth. We changed the girth. We tried two different farriers. He now has half pads in his shoes as he was sensitive on his soles. And he was still up. "Up" up. And so progesterone was suggested, which they use for many show horses, to chill them out or "take the edge off" as my trainer says. Certainly he needed the edge taken off. I think of it like Welbutrin for humans. The diet was looked at too. The hay changed. The grain changed. And slowly, very slowly, he changed. I first noticed that his eye looked softer. He let me ride him bareback without too much fuss, in a halter. I'd "pony" him -- this is an English country technique used by me and other people who'd had ponies as little girls on which they'd gallop through the woods, dress up, carry cats onboard, take on picnics with sandwiches strapped to the saddle, flopping about on the way, and tie them up to trees and do all kinds of things they'd frown upon in the very smart American equestrian world. But I thought ponying was the key. I'd scratch his neck while on top of him, pull his ears, lean back on his rump, ask him to shake hands with me. I'd lay my jacket over his neck while we walked from the ring back to the barn, got him used to my taking on and off my jacket in the ring, made him stand by the jump standard while I picked up and put down my water bottle. I'd sit in his stable and look at him and talk to him. I'd bring the dog in to talk to him. Usually he'd snort, stare at me with an alarmed look and then he'd settle and chill and start to munch on his hay. 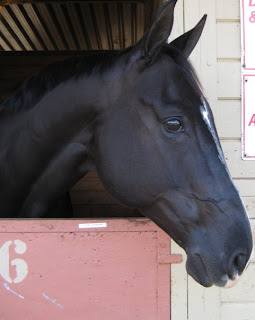 Heather, the lovely assistant trainer who's now moved to San Francisco, rode him on the days I didn't, usually once a week. He likes consistency, soft hands, a steady leg on his side. "Riding a hot horse is counter-intuitive" says Susie, my trainer. "You don't want to take your leg off if they skoot forward; you want to keep it on. Your leg comforts him." He doesn't like "handsy" flatwork. Usually, if I'm going to jump, I'll flat him on a longish rein, making sure he bends a little but not really paying attention to his face at all. That way, when it comes to jumping, which fires him up anyway ("You want me to jump that? Weeeeeeeee!") he feels calm and relaxed.

So, yesterday, when I idly asked the chiropractor to look at him "because he's a little stiff bending left" I didn't expect the phone call I got this morning. "Yeah, you horse is kind of allover body sore," she said. "He's quite uncomfortable. I've suggested less padding underneath the saddle to help him out and perhaps some Gastrogard in case of an ulcer." Yikes. It's not that this is surprising news; I suppose there has to be a reason for a horse to be "hot" even though he vets okay, but I'm somewhat angry at myself for not figuring this out before. The chiropractor goes on to say that maybe when I'm away they can put him out on the grass, let him stretch out his neck, graze, relax. It's what I've thought for a long time. Horses need to be in fields at least for a few hours a day. It's what's natural for them and it lets them chill. In England, our horses spent entire summer getting fat and happy in big, grassy fields (I can picture them standing under the chestnut tree, idly swatting flies with their tails). The grass field is different from the turn out pen, which is dusty and full of dried mud, just fine for a roll. These are the times when I long for England, for the ability to turn out the horses in a little paddock next to the house, to let them be horses. They live a luxurious life here, to be sure, with big, airy stalls, plenty of good-quality hay, a European walker in the mornings, turn-out pens, even an equine treadmill for rainy days, but it's just not the same as chilling out in nature. 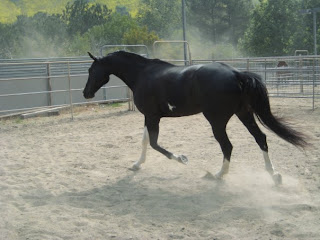 Just as this article suggests that those who have a strong connection to the natural world are nicer people, I think animals who are taken too far away from their natural habitats develop coping habits or ways of dealing with anxiety. Peso is treated no differently than any of the other horses at our barn, but he is just a particularly sensitive soul. And, by the way, this sensitivity is what makes him so talented in the jumping ring. I just wish I could find a way to help him more.
Posted by Miss Whistle at 9:33 AM

Oh thank you so much LLG! xx Miss W

Now I ache to ride. My first pony was Randolph (or Randy). He was an aggressive little thing but I loved him. He was pushy and slightly grumpy at times. But he loved to be "ponied" more than anything else. We would tie ribbons on his bridle and raced him and his sister Harriet through the forest at high speed, not a care in the world.
I have visited a friends horse at Sunset Stables in Hollywood. I hadn't been there before but all I remember from that visit was it was a dust bowl and all the horses were sneezing from the dust in the air.

I do hope Peso calms himself, maybe he does just need to get back to nature and revert back to being "just a horse" while you are away. Maybe you can secret some English grass in your luggage for him. xx

I might just sneak up to the barn while you're away and let all the horsies out so they can frolic in the open as they're meant to! xo

Ah, Miss W - so love you bringing back the memories of ponying. We used to train our ponies to stand still while we did 'round the world' on our saddles, and then got off and crawled around under their bellies and through their hind legs. I always had difficult ponies (my dad trained racehorses so I think my parents thought that having easy things was copping out in some way) but oh, the triumph when I got them to settle and do what I wanted. Also so agree about the glorious picture of the equines under the chestnut trees, with their old fat bellies dropping under the warmth of the summer sun.