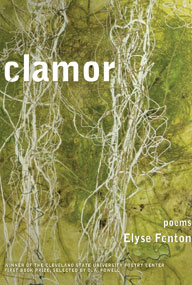 Staking fencing along the border of the spring
garden I want suddenly to say something about
this word that means sound and soundlessness
at once.  The deafening metal of my hammer strikes
wood, a tuning fork tuning my ears to a register
I’m too deaf to understand.  Across the yard

each petal dithers from the far pear one white
cheek at a time like one blade of snow into
the next until the yard looks like the sound
of a television screen tuned last night to late-
night static. White as a page or a field where
I often go to find the promise of evidence of you


or your unit’s safe return. But instead of foot-
prints in the frosted static there’s only late-
turned-early news and the newest image of a war
that can’t be finished or won. And because last
night I turned away from the television’s promise
of you I’m still away.  I’ve staked myself

deep to the unrung ground, hammer humming
in my hand, the screen’s aborted stop-time still
turning over in my head: a white twist of rag
pinned in the bloody center of a civilian’s chest,
a sign we know just enough to know it means
surrender, there in the place a falling petal’s heart would be.