Today, Miss Whistle pontificates, perhaps unfairly, and mounts her moral high horse with a very large whip. She thought you should have ample warning. And she apologizes in advance. 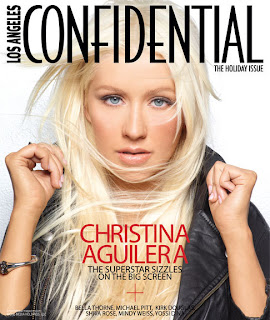 I had a thought this morning that "The Gilded Lily" would be a good name for a novel set in Los Angeles, inspired by my flipping through the pages of LA Confidential magazine which, for some inexplicable reason, is delivered to the Maharishi monthly.  I hope I mentioned that I'm writing this while applying my Ole Henrikson Truth Revealed Super Creme with SPF 15, which is supposed to Reveal my Perfect Skin? But back to LA Confidential, a magazine seemingly conceived with High End Advertisers in mind. Its pages are crammed full of Hiltons and Osbornes and party planners and stylists and diamonds, one event more glamorous than another, most of them Affairs to Remember. (As an aside, I'd like to draw your attention to the boots in this retro fashion spread. They may well be the original "boots with the fur" but I'm afraid I can't be persuaded by their rubber-ridged insistence.)

My favorite thing is the Luxe Picks for the Moguls on your list which includes these babies:


I'm really not being catty. These earings are quite beautiful and if I found an extra $42,300 lying about, I'm sure I'd be tempted.  My mother points out, however, that even the Duchess of Windsor wore paste.

Los Angeles is a city of extremes. The super-rich and the super-poor.  Did you know that the city now runs a database of unclaimed bodies?  That is, a list of people who've died whose bodies have not been claimed by their families, either because they've lost touch with them or, they can't afford to bury them. The ashes of 1440 people will be buried today by the City of LA in a mass grave in Boyle Heights.  That's a lot of people.

I know it's unfair of me to juxtapose these extremes so blithely on this blog.  It's an easy one, isn't it, comparing and contrasting those who have more than enough with those that don't have anything.  It looks smug. It looks like I'm trying to drive home a point with a sledgehammer.  It's merely a cliched observation.  We drive past hundreds of homeless people every day, some of them drug addicts, some of them fakes, some of them dealers even, but the majority are just down on their luck, many veterans, some no more than children. And for as many years as I've been seeing them, in the streets, on the medians, by the off-ramps, it doesn't get any easier to drive by without looking, without giving them something, without asking a question. "Are you all right?" is a pretty stupid question but often it's the best I can muster. "Look after yourself" is another ridiculous thing to say.  A little girl on the Riverside off-ramp of the 170 a couple of weeks ago had a sign "Just Trying To Get Home." She was not much older than my youngest daughter.  She was beautiful, too -- long, blonde hair, huge eyes and and skin marked with red sores.  She was a meth addict.  I gave her $10 anyway. I said something stupid like "Hope you get home to your family" and she smiled (she still had her teeth).

We, you and I, are one misstep away from being like these people, the ones with the signs on the side of the road, the ones who die alone and whose bodies lie unclaimed in the city morgue. Somehow, at this time of year especially, that's quite sobering.

My brother-in-law who, like the Maharishi, is a huge LA Lakers fan, collect the Jack-in-the-Box taco coupons which are distributed every time the Lakers win and gives them to homeless men and women in his neighborhood. He argues that this way, instead of giving money, he knows they're getting some nourishment. I like this.

As for The Gilded Lily. How much, really, is too much?

LA Confidential asks a celebrity in a Q&A, if you had $10,000 what would you spend it on. The woman (whose name escapes me) replies, honestly, I'd spend $5,000 at Chanel and I'd give $5,000 to the Robin Hood charity in New York (which fights poverty).  This is a fair answer.  This is more than most of us do.  I am proud of the woman for answering this way instead of lying, which would be far easier. The lie would be: I'd give all of it to charity. Because you wouldn't.

But, I ask you again, how much is too much?
Posted by Miss Whistle at 9:42 AM

That's a hard question. Apparently, we can't even decide how much too little is. Our society struggles with the notion that people might need help if they have "too little" so we construct ever more complicated algorithms for calculating this, and for many people this is an excuse or a reason for ignoring the problem. I've just deleted what was turning into a rant. My apologies Miss Whistle

All those unclaimed bodies, and the mass grave, it's just terrible. I'm afraid I don't have the answer either, but I do know that's way too much to spend on a pair of earrings.


PS doesn't really feel like the right moment but congrats on the Easy Living mention.

In a way this is the question LA asks all the time, and answers. I wish you wrote short stories about LA. I don't even like short stories, usually, but I think I'd like yours.

That magazine always rankled me as well. In this time where there is so much economic suffering it seems especially vulgar.