"Directly one looked up and saw them, what she called ‘being in love’ flooded them. They became part of that unreal but penetrating and exciting universe which is the world seen through the eyes of love. The sky stuck to them; the birds sang through them. And, what was even more exciting, she felt, too, as she saw Mr. Ramsay bearing down and retreating, and Mrs. Ramsay sitting with James in the window and the cloud moving and the tree bending, how life, from being made up of little separate incidents which one lived one by one, became curled and whole like a wave which bore one up with it and threw one down with it, there, with a dash on the beach."

From "To the Lighthouse" by Virginia Woolf. 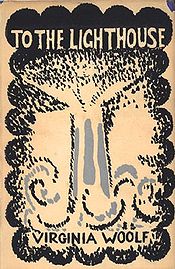 It was Virginia Woolf's birthday on January 25th. The lovely blog Varia has a wonderful excerpt from her birthday diary here.
Posted by Miss Whistle at 5:57 PM