Out of sight, out of mind

I've been forced to look at the relationship between hurt and anger, because both have been rearing their heads in the last few days. It seems that disappointment is a thing. I spent a lot of my childhood setting myself up so that I wouldn't be disappointed. If you don't expect much then you can't feel let down, right? Or, if you don't trust that people will do what they say they're going to do, then you'll never feel the pangs of disappointment. I didn't have a bad childhood. I remember it fondly. It was lovely. I remember the smell of freshly cut grass, sunshine in the trees, my mother's arms always their for a hug. But I do remember not believing I would get what I wanted.

A different thing is when you believe you are in a situation where you are getting what you want, and you believe that the other person is in that situation with you, and everything indicates that this is the case -- the right words are being murmured (though not the L word, never that), the behavior indicates some kind of connectedness, a willingness and wanting to be with the other person. (I suppose the mere fact that I'm writing about this, taking time to analyze it, shows that something is awry. People who are in normal relationships probably never have to think about this stuff.) It's not that I want to retrace my steps or analyze behavior patterns, but I do want to understand why I believed that everything was okay, why I believed that my (is it a problem that I still don't know what to call him?) and I were in the same boat, feeling the same things, maneuvering through choppy seas with the same compass, the same strong hand on the rudder. I remember saying, I thought I was chest deep in it, up to my armpits, and I thought you were too.

So, my theory is that disappointment comes from the belief that you are in one situation, only to discover that you never were in that situation all along.

I thought I was in some kind of reciprocal partnership. You know, us against the world. I thought that the way I thought about him every day, when I woke up in the morning, when I went to bed at night and at various illuminated points through the day, was the same experience he was having. But it wasn't. I was hearing the right things, there were the murmurings you expect, highlights of days told through photographs, emails, the "wish you were here" was implied, not said, and there I was longing for something more, wishing for it to be there, and not really seeing the signs. It's like a child with her fingers in her ears. La la la la la.

I'm interested in something called object constancy. It's a psychological term that involves the ability to keep one's loved ones in one's head and heart, to think of them, to imagine them, when they are not there. For example, before you go to sleep, you may go through a few highlights in your head. The loved one may not be there with you, but you can imagine them, what they look like, how they make you feel; you have a pretty good facsimile impression of them that you carry around with you even though they may not be there. And, I suppose, the stronger the bond, the more vivid the picture. My picture was in blazing technicolor. He went with me everywhere. My world was framed this way for many months. I don't know how it happened but it happened early and it happened fast. I knew somewhere deep inside of me that this was a man who would get to me, and that I couldn't shake easily.

That was my mistake. I believe it's called blinded by the light.

This, however, is interesting. A character in my new book, for sure:

“Borderlines have problems with object constancy in people -- they read each action of people in their lives as if there were no prior context; they don't have a sense of continuity and consistency about people and things in their lives. They have a hard time experiencing an absent loved one as a loving presence in their minds. They also have difficulty seeing all of the actions taken by a person over a period of time as part of an integrated whole, and tend instead to analyze individual actions in an attempt to divine their individual meanings. People are defined by how they lasted interacted with the borderline.”

Hmmm. "They don't have a sense of continuity and consistency about people...in their lives..."

I am not sure it is possible to have a meaningful connection who actually forgets who you are when you are not there.

But enough with the psychobabblicious hand-wringing. There is nothing else to do but to listen to Frank Ocean: 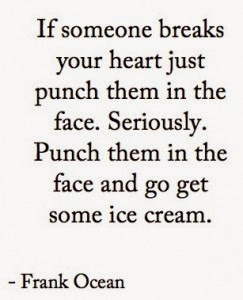 You have explained perfectly how I felt about the relationship I was in…reciprocal, willingness, connectedness (and the L word WAS murmured). Years spent planning for the dream that we moved forward with together.

Yes…I thought I was in one situation only to find out I was never in the situation I thought. (What a good point you make - people in normal relationships never have to think about this stuff.)

Surely mine (and yours too) knew how we felt and knew they didn't feel the same way…yet they continued.

I understand so much of what you are feeling. You say it so eloquently.

IT sucks. But WE don't suck.

Not sure what a "normal relationship" is, but I do recognize your thoughts and feelings in this post. Not sure if this will resonate, but one thing that has amazed me in relationships is becoming aware that the other person was saying words the meanings of which I thought I understood only to discover that they had a totally different meaning than I did. A problem...

I do think there are no normal relationships and I think that some people's minds and hearts have a quicker connection that others. Mine is slow. I am not as resilient as I would like. My intellect far exceeds my emotional understanding of situations.

I have a friend whose partner of 16 years and whom she just had a baby with started having an affair when she was 4 months pregnant. He left her just after she gave birth and is now living with the other woman who is the mother of an 8 year old. He would like his partner to get on with his mistress and be a big happy family. This is insanity. Some people think very strangely...and after 16 years! 10 IVF treatments and finally a pregnancy and it obviously triggered massive fear and he ran into the arms of a woman who'd had her eye on him for years. People do horrible things and they think things are possible when they're not. They don't consider others and they live in a bubble where things work for them and they just hope you understand their world.

Some people are just spiritually sick and there's nothing one can do. It doesn't mean your man wasn't a good man in many ways, it just means he doesn't get it and the sheer clarity you have over what should have been damn clear doesn't resonate with him. As Jennifer Aniston said about Brad Pitt, "He's missing the sensitivity gene'. You're not resilient because you care a lot. You don't flit in and out like so many do. You put your all in. You will heal and so will my friend but it isn't to be understood. I cannot be.