There are some extraordinarily lovely people in the world, like my divine friend, CM, whose voice I heard today on the phone from Europe, and it made me swoon. All the English, chalky, green-lawned, elegant loveliness embodied. "We miss you" he says and suddenly I miss England and everything about it, especially now that it's midsummer, which is, I think, the very best, most magical time of the year.

There are also the cheesers. My father thought that people who were too smug, too pleased with themselves were cheesers, and I do think it's an awfully good word. They often wear blazers with the brass buttons just a little too shiney, and hair slicked a little too well into the most fetching style. They're the type of people who profess to love dogs but wince imperceptibly when a dog jumps up on them.

I spoke to a man this morning, Ivy-league educated, handsome (from his pictures), witty, but just edging on cheeser-dom. I can sense it at about 100 paces, even, sadly, on the phone. Underachievment is a far more fetching trait than cheeser-dom (fromagerie to my French readers, or those tuning in from jolly hols in the South of France.) 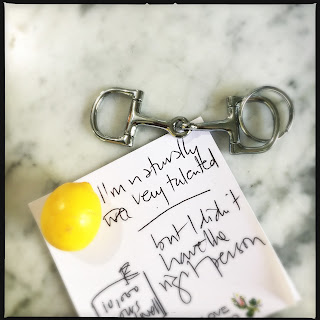 Let me paint the picture for you. I'm in the garden in my birks and cut-offs, hair in a pony tail, arms deep in pots of dirt where I'm planting tomatoes and marigolds when I get a text from a man I met on Tinder. I've never met this man, but he seemed pleasant enough in our brief electronic conversations. It's a numbers game. My ex-husband's words resonate in my tomato and geranium-filled head. There's someone for everyone; you've just got to find them. So I ring. And he's perfectly pleasant, polite and charming until these words fall out of his mouth, describing his photography skills: "I'm naturally very talented." And suddenly he didn't need to say another word. (Although he did. He said, "We're clearly intellectually compatible but we don't yet know if we want to rip each other's clothes off." I wish he hadn't.)  Because that sentence makes him whiff distinctly of cheese. And that cheesy smell won't go away. Sigh.

That's the thing. You are so excited every time you call someone. You think: maybe, just maybe, this is the one.

It's like the man who like Abyssinian cats. He was an architect, elegant, tall, erudite, had a wonderful way of looking at the world, and I was sitting opposite him at a large dinner party, and I thought, look at this, we're at the beach, and the sun is setting and here is this talented, attractive man sitting across from me, and perhaps, just perhaps...and then he went into a 45 minute diatribe on his obsessive love of the Cats of the Courts of Ancient Egypt. He was a Cat Evangelist. Which, if I were a cat evangelist, would be marvelous. I'm a dog evangelist, a dogbian, as everyone knows...

And similarly with my friend the Naturally Very Talented photographer...to some people his words would just wash over, they wouldn't matter. To someone else it would be nothing. To me, however, brought up with overt cheeser-dom and the pointing out of things All Things Cheesy, it ended right there.

The tomatoes have been planted, and there are geraniums and lobelia outside the front door in turquoise pots. Things are slowly coming together. I am no longer negligent, but I was. I am supposed to be a nurturer. When I nurture, I'm happy. So I'll start with the garden.

Oh my, that "naturally talented" comment stank so much of fromagerie that it elicited a bark of a laugh out of me over here in the South of France. Quite rumple one's nose cringe-worthy. The cat evangelist I just feel a tad sorry for...

Our tomatoes are coming along in our tiny garden...It is promising...

Egads, I know EXACTLY what you mean! I had a boyfriend (my first, actually - though we dated on and off for years afterward) who thought he was the reincarnation of "007". To the point that, when he decided to theatrically break up with me, he took a stance and said, "Take care of yourself. It's what you're best at." Honestly, it was all I could do not to fall down on the ground and howl with laughter. If I had it to do all over again, I would do just that.

It also reminds me of a scene from "Lara Croft: Tomb Raider" in which the millionaire bad guy admits he knows nothing about the mysterious clock that Lara has discovered (he is lying, of course) and says "My ignorance amuses me." Quel fromagerie!