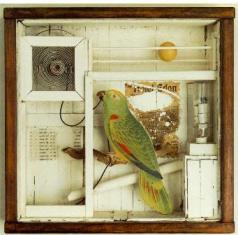 They waited for the bird to fall out of the tree.  It was the only way to go, they said.  They'd consulted parrots experts, some as far away as New Mexico and Phoenix -- the ones that really knew about the habits of scarlet macaws -- and the consensus was that the bird wouldn't come down from the tree until it was good and ready.  That's what Mike said that morning as he was pouring himself a cup of coffee from his red tartan thermos, "When Fergie's good and ready, he'll come down from that tree."

Mike had laid out three small blue bowls; one with seed, one with fruit and another with water.  An animal carrier, the plastic type you see at airports with Cavalier King Charles Spaniels inside them, was on the garden table, and another scarlet macaw was peeking out.
"That's Raquel," he said. "She's his mate.  They mate for life, you know."
Raquel's beak was poking out of the plastic rungs and she was attempting to twist her neck upward, toward the sky, where Fergie was hollering for her from his perch in the eucalyptus tree.  His call was loud, urgent and a little pathetic.

"Oh that bird, I can't teach him a thing. Twenty-five years I've had him and all he does is bite my fingers. He thinks I'm a threat, that I've got my eyes on his lady."  He looks over toward Raquel, craning her neck.  "Good girl, Raquel," he says lovingly.

There's a copy of the newspaper on the table, and an old book, bound in red, about medieval falconry.  The cover is etched in gold.  A knight and a bird in a leather hat stare back at me.  Mike has dressed in layers.  Maybe he was born back east where those things come naturally.  Apparently he's going to be here for a bit.
"You can stay as long as you like," I say. "You know, until the bird comes down."
We both stare upward, with a concerned looks on our faces during the momentary lapse in the conversation.
"I might be here for a while," he says.  "I'm prepared though."  He smiles at me with his dark brown eyes. I fancy him a Cherokee with shamanistic powers. I wonder if the bird up the tree is trying to tell us something.
"Do you think it's possible he's trying to tell us something"? I ask.
"Sure, he's saying 'I'm sick of being in my cage, and spreading my wings and flying across the canyon felt great.'"
I laugh politely.
"But you know" Mike continues, staring up at the bird, who is pulling at the eucalyptus leaves with his beak,  "When I first got him I thought he was a girl, and with that red hair and all, I called him Fergie, after the princess. I wouldn't be surprised if he's still pissed at me."

The bird sounded pissed off as hell, squawking like a pteradactyl, so loud you could hear him from the top of the street. So loud, in fact, that the neighborhood coyotes would howl as if an ambulance were passing.

Mike and John camped out in the garden for four days. It was Easter week and the geraniums had just started to blossom their impossibly neon pink.  The men came at dawn, left at dusk, took it in turns to call up to the bird, alternately coaxing and berating it.  Every morning I brought out cups of tea. I didn't ask if they wanted milk and sugar. If you're on a vigil, you need hot, sweet, milky tea.

Nights were cold in the canyon that week.  The owls knew they had a visitor, tried to engage him in conversation, but to no avail.  The dogs waited too, blinking in the sunlight at the base of the tree.  The hawks circled once or twice a day, retreated.

"In the old days, you could call the fire department. They'd come out with one of those cherry pickers. But they don't do that any more. Some bullshit about insurance."  Mike had his hands inside his big blue down parka even though it was a mild day.
"I'm not sleeping," he said. "Neither's John. We can't.  These birds are like babies to us."

Every day they fed Raquel at the the table so that Fergie could see, but he usually turned his back.

"Come on down here you old fool" called Mike.  "Fergie. I'm serious. Get your ass down here."  And finally, exasperated, he turned his back on the bird and walked towards the gate.

"I'm leaving, Fergie" he said. "Bye bye.  I'm leaving now.  Bye."  A rouse that so often works like magic with small children evidently does not work with parrots.

When I went outside on Saturday morning with two mugs of hot, sweet tea, neither Mike nor John were there.  There was no sign of Fergie either. No rustling in the eucalyptus. No thermos. No newspaper. No trail of birdseed.  The sky was a perfect optimistic blue.  This is a good sign, I thought.  It's Easter Saturday.

They didn't pick up the phone immediately when I called but finally Mike's voice said "Hello."  It sounded the opposite of what I'd expected.  Small and muffled.

"He's dead" he said, perfunctorily.  "We found him on the ground.  No animals had touched him.  He was in tact.  We brought him home and Raquel tried to groom him.  She was nuzzling him, pushing at him with her beak..." His voice trailed off and there was silence on the line.

Wonderful story, Bumble. Is it true?