I've just come from a funeral of a friend's father. A simple service, with rousing English hymns (why is it that Jerusalem always makes me cry with the line "bring me my chariot of fire"?), and a fine eulogy, and a most excellent Joyce Grenfell poem read by a grandson. We drove up to London early -- too early, in fact, because I'd misread the time -- and stopped in a workman's cafe in Kew for a milky cup of tea and a sausage sandwich. Our muddy boots had been jettisoned for black coats, an elegant suit for him, a pencil skirt, sweater, pearls and heels for me. I don't think I've worn heels in four weeks and I tottered about on my toes, feeling rather ladylike. We're like Parker and Lady Penelope in our muddy car. "Guess who the country folk are?" we laugh as our car is lined up with the rather nice, shiny Audis and Mercedes at the Hurlingham.

The boy who read the poem is twelve and we've started a Scotch Egg society together. We're both huge fans, and he gave me his secret place today. "Randall's" he said, "Granny's butcher. They have the best ones." I rather like our secret club. I'm a glutton for all things English - also sausage rolls and Coronation Chicken sandwiches and profiteroles, which were served after the funeral.

I watch my elegant friend greeting her dad's old muckers with such warmth. I watch her brother speak about his father as the breath catches in his throat. I watch her put her arm around her mother, in the front pew, as the curtains are drawn around the coffin.

It's funny how we mourn. Culturally, I mean. The English use restraint. They get through it. We're more histrionic in LA. I don't mean it disparagingly. There's just more drama, more emotion on display. Here, there's a sense that this is part of life. "Always go to the funeral," my friend Gary once said to me. Gary is in his eighties and has been a captain of industry in his time. He's and kind and good and manages to get free nights at the George V in Paris, because he always knows someone. When he gives advice, you listen. It's a simple thing, isn't it? I always believed that you went to funerals for people you knew, but you don't. You go to funerals to support those you love.

It was our first funeral, me & C, and I held his hand in our pew, and listened to his basso profundo belting out the hymns at least two octaves below everyone else (it's so public school, this habit of boys to try to sound as "hard" as possible. Adorable). Everything is different when I'm standing next to him. I am so immensely proud and I feel so completely safe. "Cor, he's so handsome," said a woman I'd never met before, with a twinkle in her eye. "I should nab him." And then she grinned. "Oh but wait, you nabbed him. Oh, and I forgot; I'm married." He hasn't a clue. He has no idea how lovely he is. It's wonderful.

There are still lots of maps. It's a habit of mine (to watch the sun go down. On Echo Beach...) -- I have an intense need to walk every inch of a new place in order to call it my own and in order to lose myself in it. I make concentric squares, or ziggy rectangles, from my house every morning, venturing further afield each day. On Saturday we walked a bit of the Ridgeway Path, between giant beech trees. 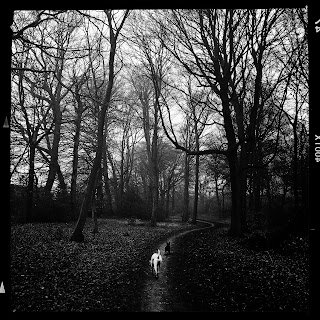 And then I stood in the middle of Buckland Wood and realized that I was experiencing something close to euphoria.


I listened to a piece on Radio Four about the poet John Clare. I like this very much: 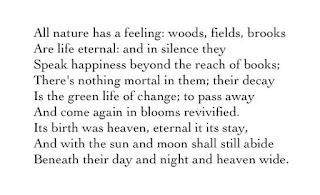 And I'm very interested in the war artist John Nash, who is exhibited at the Tate Britain until early March. He had a special affinity with two hills in South Oxfordshire, named The Wittenham Clumps, and first saw them in 1911, as "a beautiful legendary country haunted by old gods long forgotten". I have similarly imagined places as they may have been hundreds or even thousands of years ago, and wonder whether the old ghosts still haunt them. 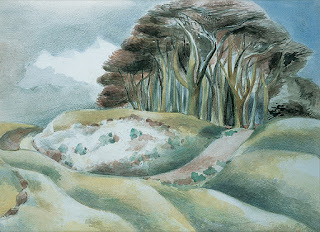