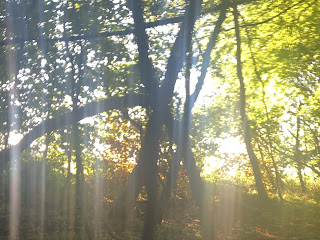 I do not ever regret rising early in the summertime. I woke to the wind blowing through the hazel leaves, and as I made my tea, watched the blackbirds hopping about on the grass looking for grub. I've learned that the days will be too hot later on, and so this morning I ride at 6. There are no cars on the roads and the woods are still waking up, shafts of sunlight glittering through the beech trees and the sound of the breeze in the paper green foliage. It's mesmerizing, this early light, the birdsong, the enormous blast of both optimism and smugness for being the first one up. I do not ever regret it. It's the time that we're trying to stretch, this English summertime, reminiscent of childhood, the constant feeling of not sleeping enough but not wanting to miss out on the light. I think of my father who walked his dogs at five or six when the light was still pink and the flies had yet to start irritating the cattle, who lay in puddles on flattened hay. It's the magic hour, when we are bound neither by time nor space, but somehow we float in it, absolutely bulging with possibility. This is what I want to capture. There is no regret or past or future, just this breezy, pink present.
Posted by Miss Whistle at 11:40 PM

I'm so glad you're writing more again. I do love it.

This is quite lovely. I was completely inside the feeling. Thank you, miss whistle.

Having something you never regret is a great gift. <3