I've become what they term a business traveler, which means that I know all the shortcuts at Heathrow and can scam my way into upgrades. Actually, that's not true. But after fighting it for so long I've realized that plane journeys can be quite oddly transformative. For example, I saw the film "Where'd You Go, Bernadette" and it spoke to me.


"People like you must create. If you don't create, Bernadette, you will become a menace to society." - Maria Semple


There it was in the middle of this twisty, talky, odd, rather charming movie, with fierce characters who act more like people I know that what we normally see in films. There it was coming out of the mouth of Lawrence Fishburne, and suddenly everything made sense.

My daughter came for dinner on Friday night and even though I usually spend the night before a trip thinking about packing and wondering whether all my knickers are washed, and tidying drawers in case I die and someone wants to find something, I cooked dinner for her and some lovely old friends. Alison Roman's new book Nothing Fancy is delightful. I made three things I hadn't before and they were easy-peasy pudding and pie, and also delicious. I even made a salty/sweet/sour cheesecake with a Ritz cracker base. Dinner parties put me into a trance-like state. I hook up NPR to the speaker in the kitchen, don my pinny and set to work collecting branches and rosehips (and a few pink roses) from the wet garden, refilling the candlesticks, and chasing the neurotic dalmatian who hates to be downstairs when she could be upstairs and has found ways to let herself out and in of the front door. Yes, she uses her paw as a hand. It should be cute but I am irritated because it was raining on Friday and every time she came in there were new muddy footprints and fresh wet leaves on the carpet. The ritual of laying the table and putting flowers around the house and lighting candles and finding interesting snacks is weirdly soothing for me. It's an act of love, I suppose. But also, somehow, it's a sacred practice. I don't know if that sounds odd. My menopausal brain is struggling for words (see Deb Kopaken's brilliant piece here). There is something that feeds my soul in preparing for a dinner party. I love being alone in the kitchen with my dogs. I love the rhythm of it. I love the self-partnered dance; the picking up one thing and taking it to its rightful place and picking up another thing from that place to the next and so on. I love the detail of being in the zone. I love that it's raining outside and that inside my kitchen, which is usually cold, because of two walls of windows, it's warm and cozy from the oven and the movement of the air.

But most of all, I love that my daughter is in the same place, give or take thirty miles, for the first time in six years, when she first left for college in Maine.

So, if this can be a reminder; if you have a creative bone in your body, and I believe that most of us do, please feed that need, even if it is with rain-soaked rosehips and dried poppy seed pods, and don't just bury it, as I have done. Creation is an act of love.

And if you don't you will forget how. Case in point: writing. Writing is a habit. And it needs to be fed every day.  (Otherwise you end up with self-evident platitudes like this.)

I'm staying in a very nice hotel in New York owned by an Englishwoman who has great taste in paintings, especially by the artist Francois Bard, and she's clearly a dog lover. Also, they know how to make proper tea, which is nothing short of a miracle in New York City. How delightful is it after a long flight to be greeted by this face? 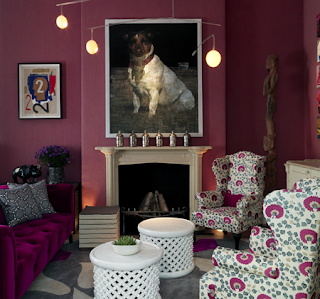 It's not my neurotic Dalmatian, but it's pretty wonderful.

A very happy Sunday to you all.
Posted by Miss Whistle at 5:36 AM

Due to the level of quality provided by our company almaher Company شركة تنظيف بحفر الباطن
cleaning and cleaning services of air conditioning and sewage and insect control on all household services that we doشركة تنظيف بحفر الباطن
and taking our prices suitable for all segments of society, has become the best and most important company in the field of cleaning. شركة تنظيف بحفر الباطن
In order to maintain our success and progress, the company strives to continue along the same lines, through continuous development and the constant pursuit of following all that is best for the masters of customers. شركة تنظيف بحفر الباطن
So, never hesitate our dear customer to contact us if you want daily, weekly or monthly cleaning for your home, your garden or your company, شركة تسليك مجارى بالمدينة المنورة
or even want any kind of cleaning services, we will promptly meet your request with perfect quality and low cost .