As you, my dear readers, are no doubt aware, I invest at least three minutes of every morning buried in the Writer's Almanac, Garrison Keillor's marvellous daily missive, filled with literary notes and a poem, delivered to one's inbox and your local NPR station.  I do not find it coincidental that today's notes are about James Joyce, a strayed Roman Catholic:


Around the time that Irish writer James Joyce was defecting from the Roman Catholic Church, he was investing secular meaning into the word "epiphany." In his early 20s, he drew up little sketches, sort of like "prose poems," in which he illustrated epiphanies. He explained to his brother Stanislaus that epiphanies were sort of "inadvertent revelations" and said they were "little errors and gestures — mere straws in the wind — by which people betrayed the very things they were most careful to conceal." He also wrote that the epiphany was the sudden "revelation of the whatness of a thing," the moment when "the soul of the commonest object ... seems to us radiant."


It was a literary device that James Joyce would use in every story in his collection Dubliners (1914), a technique that he would become known for and that many modern writers would emulate. Joyce's Dubliners ends with a story set at a party for the Feast of the Epiphany, "The Dead," and the story ends:


"His soul swooned slowly as he heard the snow falling faintly through the universe and faintly falling, like the descent of their last end, upon all the living and the dead."


Today is Epiphany and it is the funeral of the Maharishi's father. 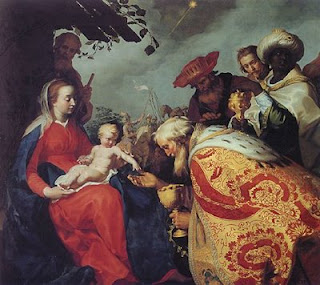 Girlfriends brought shears, sandwiches, sweet treats, a key lime pie, bits of string, old glass vases and we spent lunchtime around a large table in the driveway, surrounded by daisies and green stuffs, hundreds and hundreds of daisies that Sandy and I had brought home from the LA flower mart earlier that day.  Everyone dived into flower arranging duty, interspersed with mouthfuls of sandwich.  This is what it must feel like to have lived in a small Italian village in the twenties -- all the women diving in to divvy up cooking and flower duties for funerals and weddings and births and christenings. "John would have LOVED this" says Sandy, "all these women busying themselves for him."  We all laugh. Far too loud and raucously.
Posted by Miss Whistle at 7:31 AM

Ah, you have given me my line for the day - 'the whatness of a thing'. Also my mental picture of the day: all the women gathered with the flowers. I love both and thank you for them.
I shall think of you very much today.
xx

What a lovely image; laughter and joy even at such a bittersweet time. Masses of love to you, J and your lovely family at this hard time - I sang along with you today, in spirit. xx

wonderful send off. a celebration of life. bravo!