There is something sweet and rather interesting about having a new person in the house, especially when that new person is a particularly elegant old man.  Pepper is an awfully nice chap, a decent type of dog.  He is willowy and whitening around the muzzle, kind and dear, but he has sore hips and his hind legs don't work as well as they used to.  He's madly in love with Bean, the younger, and lesser spotted, and somewhat wary of Dotsie, the policeman of the house. He conducts himself with great aplomb, only having to be told once that he may not lay on the human sofas, but that there are two dog sofas to which he is more than welcome (this has to be extremely complicated for the canine brain, but he has learned, quite deftly, which is which and adheres to the rule).  He is finally eating his food after a week of trying various combinations of kibble and wet food, metal bowls and his own favorite Lakers purple and yellow bowl, and placement. In his former life, his food was put down and left all day, so for 9 years he's been on the grazing menu. One can imagine that this must be quite a change.


Today, with the rain pouring down, barring one long visit to the dog park, there hasn't been much outside play, and the doors, which are usually open, are closed.  I'm used to the girls never needing to pee. I don't know if it's a girl dog thing, but they're pretty good at saving it up on rainy days. Dogs aren't, I've discovered, the same as bitches. After supper he peed about half a bucket's worth on the kitchen floor. Thank goodness for slate.  I can't be mad at him; he's nine, after all and it really is my fault for not taking him outside.  He has a doleful expression on his face. He's awfully, awfully embarrassed about this mistake and I'm reminded, somehow, of elderly grandparents and the terrible indignities of old age. 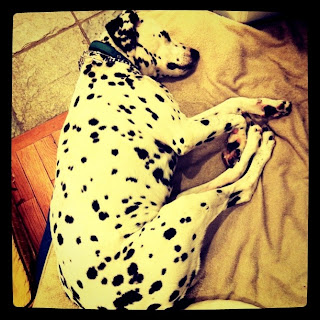 There is very little to distinguish this dog from a human.  Monica, who volunteers at the animal shelter every weekend, says he has human-child syndrome, which explains his behavior when he first arrived. He's used to being the only dog in the house, to sleeping on the bed, on any sofa he chooses.  The bed is By Appointment Only in our house, usually when I'm cold, and need a doggie hot water bottle.  Then there is the humiliation of having to wear the spiky-ish collar, because he tends to pull without it, and the having to put it on every time he sets foot outside the front door (we had a jailbreak run a week ago and one can't really blame him, after 9 years in one house, with one owner, trying to find his way home), and the having to get along with two ladies, one of whom wasn't exactly welcoming.  "When you're outside of school in school uniform you are ambassadors for this school and we expect you to act as such" said our headmistress, the formidable Mrs Jean Anderson.  Dotsie was a jolly rotten ambassador for our house, snapping at the poor, befuddled gentleman visitor.  Mrs. Jean Anderson would not have been happy with her behavior, spots or no spots.

The Maharishi and I took them to the dog park on Sunday afternoon. It was a lovely, lazy afternoon and all of the dogs rushed about to greet their friends while we sat on one of the rather charming benches and smiled into the sunshine. While the lesser and greater spotteds sniffed and wagged and were generally social, Pepper ran at a dignified lope around the perimeter of the park, stopping occasionally to greet a brother or sister with a civilized "Good afternoon," but generally just running slowly, waving his tail in the breeze.  "Run, Forrest, run!" said the M, and we laughed and laughed. And then he stopped and looked at us, as if to say "I'm pretty tired... I think I'll go home now."

I'm amazed at the elegant way he has taken to his new home, without fuss, like an old army officer.  As the M keeps saying, he's not going anywhere.
Posted by Miss Whistle at 7:03 PM

This made me a little weepy but in a good way. I'm so happy he found the lovely home he has now - to gently grow older in. 3 is a perfect number. x

This made a little weepy but in a good way. It makes me so happy to know he found such a warm and loving home where he can grow old gracefully - the brave soldier he is. x

Miss W - I have just read two of the most beautiful posts: this (about the newly arrived Pepper) and via LinkWithin, '22 Years and Counting'.

I love that you can be both tested and wowed by the same man, in the same day - perfectly imperfect, that's where love is.

Wonderful to read, he's a gentle old soul isn't he?

wonderful. they do take on these distinctive personalities-as gentlemen dogs age they do become distinguished- He still has some great living to do. I do think 3 seems right. Congratulations on the new old addition.

You made me weepy too! What a gentleman. My Dad used to play a game with us-- imagine if you unzipped the "dog suit". Who would you find inside?? I think you would find Jimmy Stewart:))) I love hearing about Pepper.

@Michelle -- You are very kind. I think 'perfectly imperfect' is a great description.

@little augury -- Thank you, we're very happy with our new old addition! And you're absolutely right about forming these distinctive personalities; it's just funny to find one ready formed!

@Mare -- oh brilliant, I love the dog suit idea and you're of course absolutely right, he IS Jimmy Stewart!

Thanks so much for your lovely comments.

Loved this post, made my eyes misty. Me and my love are in the process of buying a house, and I can´t wait to have the space for a dog so the fun can begin! Lovely lovey post and lovely gentledogs you have.
Sue

Pepper is such a sweetheart. Re the sore hips - probably arthritis. My 12 year old Rottie bitch has a combination of things to help with that - regular Cartrophen shots (about every 3 months), and both joint supplements (google "Joint Guard treats", I'm sure there will be an equivalent available in the US) and 4 fish oil (1000mg) tablets daily. The difference this makes is astounding.

In the meantime, hugs and best scruffles to all the Spotted Ones!

That is a very satisfying conclusion. I am very happy he has found a home with you.