Believe Them The First Time: trust your gut

I've learned something lately about trusting your gut. I've always thought that I had rather good intuition when it came to people. That is, I have a well-honed BS monitor and can spot a phoney at 30 paces. But other things are hard to spot. I've had a couple of days to think about this, to let it sink in, and I've come to the conclusion that being blinded by love isn't always the greatest thing.

Let me explain. I have had for the last six months or so a weird little anxiety-provoking feeling. It's a visceral feeling that something is wrong but you just can't quite put your finger on it. I realized that my whole life was put on hold for love and yet, having grown up with a father who was rather distant and being used to difficult, scatter-brained men, I chalked it up to old issues, childhood things.  And of course I fell back into my old habit of trying to make everything feel right and ignoring the bad stuff.

I was so convincing myself that love was the answer, that I ignored the aching, dry-mouthed sensation I felt almost every day. (And to be honest, I'm a pretty practical, problem-solving, get on with it, person, a little sensitive perhaps, but I'm not completely neurotic.) All I knew is that I thought it would get better and the feeling would go away.

But when you live for a really long time with a tiny tinge of feeling that something is not quite right, and then someone reveals to you, plainly, without any room for interpretation, who they are, everything falls into place. Everything makes sense. You have that bolt of lightning moment like God is whacking you upside the head and saying "wake up!" And then, with the greatness of sadness, the picture became full. And, without going into too much detail, the relief flooded through my body.

I don't hold with the theory that all men are bastards. Certainly my ex-husband isn't a bastard. He's a kind, good man who in retrospect did me a favor by leaving. My life is full and good. I feel stronger, happier, more alive than I have ever felt. But I think I've lived such a sheltered life, free from dating, and in one relationship for so long, that I hadn't realized that too good to be true could actually mean that.  I didn't realize that charming, adorable & cold as ice could together describe one person.

I suppose my reason for even writing this is to show that a) I've been a complete moron b) it's important to keep wits about you even when you're blissfully blinded by love & c) trust your instincts. If something doesn't feel right, it's not right, and nothing will EVER change that.

The biggest lesson I've learned, and if I were to give advice to my 19 year old daughter today about men and love, it would be this: 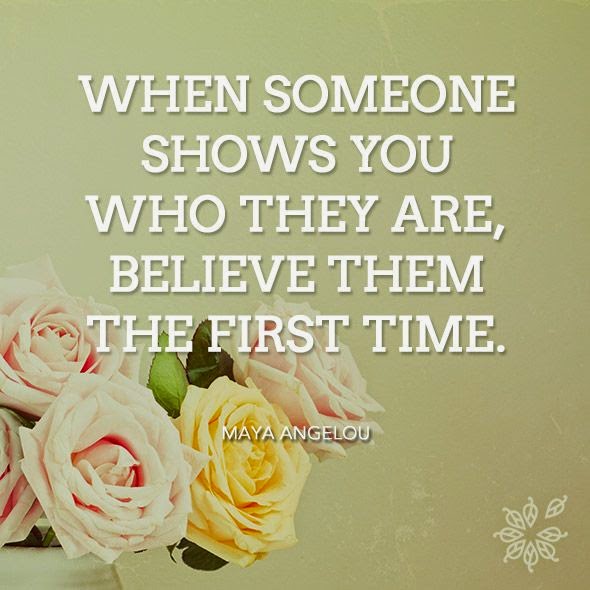 Thank you, Maya Angelou. Possibly the greatest piece of advice in the world. Had I heeded it nine months ago, I would have avoided a massive amount of pain and heartache. Of course, I'm Monday morning quarterbacking like crazy. All these things now make sense. Every little thing that seemed just a wee bit off but not really that bad, things that I was more than willing to forgive, now form a clear and cohesive pattern. I hope that there are better women than I who can handle such things. I couldn't and I won't.

And the by the way, I don't believe anyone is bad. I believe we all do the best we can. I wish him well. I really do.  I'd also like to punch him in the face.

Happy Saturday, everyone. xoxo
Posted by Miss Whistle at 1:43 PM

You are such a good soul to share this with us. I think we're all learning from you, no matter what status our relationships are in.

I would like to punch him too. There's nothing worse than making a person doubt herself and her judgment. It leaves you feeling unmoored and adrift and afraid to trust yourself. I went through this myself a long time ago, and trusting your gut is the cure. It's a good thing in any circumstance. But I'm sorry you learned it through heartbreak. And I want to punch him.

I would like to punch him too. There's nothing worse than making a person doubt herself and her judgment. It leaves you feeling unmoored and adrift and afraid to trust yourself. I went through this myself a long time ago, and trusting your gut is the cure. It's a good thing in any circumstance. But I'm sorry you learned it through heartbreak. And I want to punch him.

The Maya Angelou quote is wise, and good, and true.

There is also Alanis Morisette wisdom, which is more realistic:

You are writing so beautifully at the moment. I think I remember this from your last heartache. It is not much of a consolation, except I keep thinking: your heart will mend, and perhaps even break again, but that ability to do something magical with prose will stay forever. You will add something to the sum total of human happiness forever. You will be your lovely self forever.

Miss W. Another terrific piece of writing. He sounds like a classic narcissist.....they are expert at making us feel like cosmic twins upon first meetings.....but the minute you have been hooked and begin to express some needs of your own the shift to cold-hearted beastliness is immediate and always too cruel. I am glad you said 'no'...I would like to punch him too! And yr selfie is beautiful....I will try it, thanks for the expert info! Debo