I've learned a lot these past few days. (And I must thank you, dear reader, for indulging me and coming with me on this journey, and offering support, and cheering me on. I'm sure sometimes I behave in the most boneheaded ways, but you are kind enough not to point it out!) I've learned that no-one can teach you anything, that you have to experience things for yourself in order for them to feel real in your body (and I say this quite specifically, because as anyone who has done even a little therapy knows, understanding something intellectually is very, very different from knowing something in the meat of your bones, in your muscles, in your soft, animal belly, as Mary Oliver calls it.) Yesterday, I finally said to my sister, you were right, I was wrong. Yes, he did let me down again and again and yes, even though I keep finding books and postcards all over the house with little scribbled inscriptions in them, the man in London was not a good fit, not for me, not for where I am. But neither is he a bad person. He's kind and good and like everyone else who walks this earth, he is doing his very best, as am I, as are you.

There is one thing we share as human beings (well three if you count the fact that we are born and then we die): everyone desires to love and be loved. That's it.

And the lack of forgiveness is a heavy yoke to bear.

But this week, almost by mistake, I discovered what it felt like to be with someone who doesn't judge, and who quietly adores. And it is the most intoxicating feeling. To be in the presence of a big, sweet, soulful, open heart, someone who speaks their truth without artifice or agenda, is something quite new.

Now while I wax rhapsodic, I'm no Pollyanna (well, a bit, maybe). There have been bumps and missteps and a wealth of self-knowledge flooding in. It feels a bit like I've missed out on the last 25 years, not in a bad way, it's been lovely. I've had a long marriage, excellent children (one of whom I spoke to tonight while I was in the bath and it was 1am on the east coast and she wanted to have a girly chat) - I would change none of it. But the world of dating and courtship and the social mores of the human sexual relationship dance are completely unknown to me and I am learning and I am diving in and I am, I hope, not hurting anyone along the way, although, it's hard.

Everyone now goes online to find love. It's strange isn't it. No more can you walk through a country field and have Matthias Schoenaerts gallop up to you on a horse. 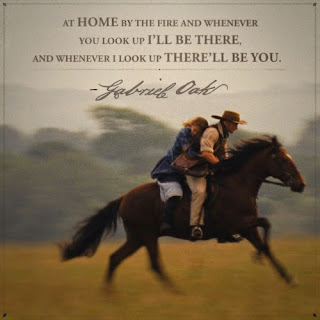 Not one to do things by halves, I'm on five different sites/apps. It's ridiculously overwhelming. It's downright ridiculous. But my ex-husband tells me it's a numbers game,  and I don't want to be doing it forever, so I'm putting my best foot forward. I'm trying my best to see as many people as possible. I feel like the prince in Cinderella, scouring his kingdom to find the woman whose foot the shoe fits. I've had drinks or coffee or dinner with men who are younger than me, sometimes 15 years younger, and men who are older than me. I've met or spoken to writers and editors, camera guys, actors, pilots, mountaineers, investment bankers, painters, professors. No firemen, but here's hoping! ;) And from each one, you learn something. You learn, for example, that you can tell within about 3 minutes whether or not you will have chemistry with that person,  or you learn to stop the date short if the person doesn't ask you one question about yourself, but more importantly, you get to glimpse, hopefully with empathy into the souls of people you wouldn't usually meet. One man had been through a horrible divorce and was clawing his way out, working hard to better himself, to make a life for his children, and was doing so with such elegance. Another wanted someone to share his passion for travel, especially to South America. Another told me very sweetly all about his old dog and how he wasn't sure how he would manage when the dogs was gone. There are so many stories. So many ways we try to relate to each other. 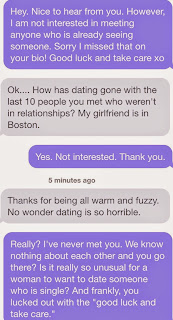 Remember, I think, Everyone is doing his best.

I've learned to be more empathetic, to be more clear about what is important to me, and I've learned to listen to that animal fight or flight instinct that kicks in when you're not with the right person. My lovely new therapist says: "This isn't right for me." To be able to separate who a person is, and how they fit in with what you need, is so important and something I haven't ever been able to do, until now, because I want to make everyone happy so I mold myself to what they want...

This is a bit of big admission at 12.30am after a long weekend. But it feels important, I suppose.

So, it's a journey of self-discovery. I am so grateful to all the people out there who are brave enough to reach out and say, I'm lonely, I'd like to connect. It's hard stuff. We humans, with our fragile little egos, so easily hurt, so delicate.

What is with this epidemic of male hostility toward women? Isn't it worse than at any other time, or have I been naive? Or is it just that so much of it appears on "social" media and so is more visible? I hope that Mr. Girlfriend-in-Boston is in the minority of men you're encountering out there. Because that is one infuriating and depressing series of texts! Signed, Mama Bear