Here is the brilliant Caitlin Moran, author of "How to Build a Girl," with ten things every teenage girl (and every woman) should know. Please share this with every girl you know: 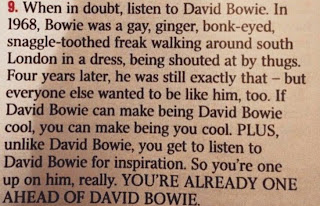 10 Things Every Teenage Girl Should Know

1. Self-loathing is the default mode of the teenage girl. You are not alone in this. Contrary to what you think, it’s nothing to do with how fat your legs are, or the unmanageability of your hair. You are self-loathing because you are turning into a woman – and this seems, to a 13-year-old girl like something exhausting, joyless and high-maintenance, for which you will constantly be judged. And you are right. By and large, that’s exactly what being a woman is right now.

3. Start the revolution with you. If you’re self-loathing, invent a “you” you don’t loathe, instead. Imagine the thing you would want to be – then be it. Make yourself your own project/pet/pretend best friend. Pretend to be confident, happy, relaxed and you’ll soon realise there’s no difference between pretending these things and actually being them. Wear a silver cape. Be obsessed with geology. Don’t speak until 11am. Intend to be the worlds first Girl Beatle. Learn what every drag queen before you knew: fake it till you make it.

5. Don’t cut your own fringe. It is far, far more difficult than you could ever imagine.

6. For that matter, don’t cut anyone else’s either. Good friendships have ended that way.

7. Every time your heart gets broken, breathe deep – it grows bigger as it mends. Imagine each line of red scar tissue on it with pride – the same pride you’ll one day have for the stretch marks on your belly, after having a baby. Skin and hearts year to make great things. Don’t be afraid.

10. Go out there and change the world, so it works for you and every girl like you. I know you will.
Posted by Miss Whistle at 10:47 AM

Thank you for this! I have a teenage girl and my God we need all the help we can get! Lou x

Wonderful, Bumble. Thank you. I will share, and ask that it be shared further. xo.