"All sorrows can be borne if you can put them into a story or tell a story about them." -- Isak Dinesen

Today a family we're very fond of is leaving Los Angeles. They are moving to the milder climes of Charlottesville, Virginia, which, as I keep pointing out to my sad daughter, is actually a happening place, being the chosen town of the University of Virginia. "It's not like they're moving out to the sticks," I think I said, imagining how happy I'd be living in the sticks (very).

This leaving thing is a hard thing for me to get my head around. I hate goodbyes. I'm terribly bad at them. I shuffle about from foot to foot, feel anxious, self-conscious, mutter a bit, and think of a thousand things I could have said on the car ride home. "I'm not going to say goodbye," I told my friend, as our children embraced next to us, with the five minute hug. "Thank God for that" she said. "I hate them." Between her Virginia-ishness and my Englishness, we're perfect. So we smile broadly, wave at each other & I begin to plan my RV trip across the country.

Thus far, three of us are on the trip. It's Thelma & Louise & me. I wouldn't mind taking my dogs either, showing them a bit of the green grass of Wyoming, the fields of Kentucky, the Chesapeake Bay. I fantasize about my RV. It's going to be one of those silver bullet ones, shaped like a sausage, and very sexy inside, with a proper stove so we can cook delicious meals along the way, as we sashay in and out of local farmers' markets, meet the local folk, pick up gems of rural wisdom. We'll be wearing our cut-offs, checked gingham shirts in either blue or red (depending on the state, ha ha), our Converse sneakers. We'll bring rainwear and gumboots, polo-neck sweaters, various hats, pots & pans, a laptop or two, lots of lovely maps, a foghorn (just in case) and some mace. Ever since the terrible murder of a school girl in LA, I've become security minded. The family password (for both identity & stress situations) has been established. And pepper stray is being carried by all the girls in the family. I am dying to mace someone! Better, would be a mean-looking pitbull on a spiky metal chain, but I don't think the lesser-spotted girls would ever forgive me.

My husband dislikes the South, maybe with good reason. He's worked there. He tells me it's cliquey, it's racist, it's Republican, but I have to say that despite all those things, the South holds an appeal for me. Kristin once told me that she'd like to go antiquing in the south and I've always thought about that idea. It's probably a little like antiquing in Buenos Aires. Lots of the old rich in their huge plantation-style houses have lost their money and have to sell their prize possessions. One imagines Pirates of the Carribbean-style caches of silver knives and forks and gold doubloons filling small, dusty junk shops. Or a giant Tara-like estate with a big Yard Sale sign at the end of the driveway. I'd pop right on in. 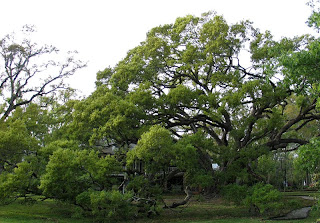 Another option would be to dip down into the Gulf of Mexico and visit our friends in New Orleans. Yet another transplant from Los Angeles. New Orleans is full of stuff I'd like to see, not least being the president of the Live Oak Society, with whom I had a brief but lively email relationship during the aftermath of Hurricane Katrina.

Four teenage people were chatting in my car yesterday. All four of them were leaving their current schools for new high schools. One girl said, "I'm going to miss Sarah. Because it's not like we're particularly good friends and we don't hang out or anything, but I actually know I'll never see her again." It's not like that with our Charlottesville-bound friends. I know we will see them again, but there is still that poignant notion that life is just so damn fleeting. Isn't this what we have here for our four score years and what, ten or twelve? We live, we love, we decorate the place with things we like, we die.

So doesn't a road-trip sounds like a great idea?
Posted by Miss Whistle at 11:04 AM

A road trip sounds like a piece of heaven. I'm in. Can we time it when the multi state yard sale is happening? I've got interested dogs too, and perhaps a kid or two. xo, KBee

Road trip—my favorite! Especially one with "lots of lovely maps," my other favorite thing. I've been dying to do the Southern route, hitting Austin, New Orleans, Memphis... What a brilliant idea. (Can I forego the cut-offs, though? Don't want to scare the public.)

The northern route is spectacular. The southern route is, well, nearly 2,000 miles until you hit anything other than dirt and tumbleweeds. Take your pick...

I'm in for the southern route! Fried food and cut-offs - here I come!!!

KBee -- You know you're my original inspiration babe! Come on down.

Susan -- Cutoffs aren't mandatory, worry not! I'm glad you're on board too.

Artichoke Queen -- I think maybe we do one route eastbound & the other coming home, what do you think?

I better start working on my legs a bit more considering we are going to be in cut offs. I vote for the southern route. Believe it or not, I have family in Arkansas and Tenn. Yes, there are Jews down there.