Do you know the story of Aristotle and Phyllis?
This aquamanile caught my eye at the Getty yesterday.

I think my mother said something like "Uh-oh, the Maharishi had better watch out": 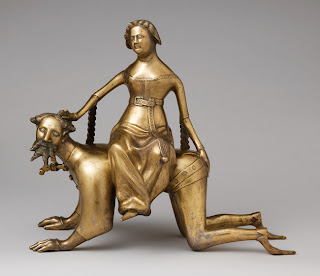 Here is the description from the Met:

Aquamanile in the Form of Aristotle and Phyllis, late 14th century
South Lowlands
Copper alloy
12 3/4 x 7 x 15 1/2 in. (32.4 x 17.8 x 39.3 cm)
Robert Lehman Collection, 1975 (1975.1.1416)
This aquamanile, representing the story of the great, aging philosopher Aristotle humiliated by the beauty Phyllis, is one of the best-known examples from the Middle Ages. The narrative tells of Aristotle's annoyance that Phyllis was distracting the pupil Alexander from his studies and of his attempts to separate the lovers. In retaliation, Phyllis schemed to seduce Aristotle, promising him her affection if he would gratify her wish to be carried around the garden on the philosopher's back. Phyllis arranged to have Alexander view Aristotle's disgrace from a window. When discovered, Aristotle cautioned Alexander that if one as wise as the philosopher could be so easily duped by a woman, a less experienced man should be exceedingly cautious.

Source: Aquamanile in the Form of Aristotle and Phyllis [South Lowlands] (1975.1.1416) | Heilbrunn Timeline of Art History | The Metropolitan Museum of Art

Can you believe the placement of her hand on his bottom? And this from the 14th century? So I went searching a little further:

Aristotle, tutor and counselor to Alexander the Great, sought to separate the youthful monarch from his paramour--now usually known as Phyllis--who was absorbing all his time and energy, and causing him to neglect his political duties. Reluctantly, Alexander agreed to the separation, but soon revealed the fact to Phyllis. She thereupon contrived a scheme to nullify Aristotle's influence, aiming to regain her lover's attentions.

The plan was simple. Early in the morning, when good scholars should be laboring at their books, Phyllis slipped into the garden next to Aristotle's study and, not far from his open window, she softly sang and danced. Her hair was loose, her feet were bare, her belt was off her gown. Aristotle heard her song, and then he turned to look at her: "that made him close his books and cry: 'Oh God !'," it being clear that the deity invoked was Eros. When Phyllis came close enough to the window, Aristotle reached out and seized her firmly. He told her of his ardent wish; she promised to fulfill it, if he would first satisfy a trifling whim of hers. He must pretend to be a horse, get on all fours, wear a saddle, and let her ride around the garden on his back. The besotted Aristotle did exactly what was asked, yielding up an image that approached the essence of burlesque. "In this was grammar betrayed and logic much dumb-founded," remarked the commentator in Le Livre de Leesce (c. 1373).

Riding on the Master's back, Phyllis loudly sang a song of triumph: "Master Silly carries me. / 'Love leads on, and so he goes, / by Love's authority'." The song was a signal for Alexander to look into the garden from his window. "Master, can this be?" he called, going on to question Aristotle's flagrantly quadruped behavior. The old sage answered that there was a lesson to be learned from his example. If a wise philosopher, aged and grey as he, is unable to resist the power of Love, then Alexander, yet youthful and hot blooded, must be immeasureably more cautious in exposing himself to such danger. Amused by the sophistical defense, Alexander forgives Aristotle's ridiculous indiscretion and then, presumably, reunites himself with Phyllis. The philosopher would trouble them no more, having lost his credibility.

In this woodcut, Phyllis has a whip.
Hmm. *rubs chin thoughtfully*

Oh, am anabsolute art history geek, but havent herd of this story. I love examples like this. Also, not to drag this issue into it, but do you see the body of Phyllis in the drawing!?! Very... real shall we say :-)