I have just finished writing my Christmas list because the Maharishi and the children asked for it. I added a postscript that is sure to throw the children into fits of hysterics -- "I'd rather have a photograph taken by you, or something you've painted."  They will, of course, think me mad.  My list contains the usual suspects, books, glass birds, Votivo candles, a case for my little camera (a replacement for the one that dropped out of my back pocket in Little Tujunga Canyon),  Bedhead pajamas, a Mexican cross I saw in the LA Times, M&S white knickers in the five pack, and so on. I'd like to throw in girly stuff like a gift certificate to the DryBar if it didn't sound so madly LA, perhaps a few shots of botox into the crevace now forming between my eyebrows?  But the truth is, I have everything I need.

Minky went to the SDLC diversity conference in San Diego, representing her school, with 9 other students.  She came back inspired, empowered, challenged & happy, with new friends from Baltimore, Detroit, Arkansas.  In one exercise, they were asked to stand up when they heard the name of a group they could identify with. For example, Christian, Jewish, Male, Female, etc.  She leaped to her feet when she heard "Atheist" and was mortified to discover that she was one of only three (out of 1500 kids).  The same device was employed to ascertain socio-economic class. Stand up with the phrase you most identify with. Do you have less than enough, enough or more than enough?  My sweet girl told me "I know we're being careful with money and frugal at home at the moment but compared with the rest of the world we have more than enough." Yes we do.

So as much as I love baubles and sparkly things of Christmas, I don't really need them.

I was walking by the LA river yesterday. I'm sure for those who live in rural environments -- by that I mean deep in the country -- it's hard to imagine that a hard concrete man-made river which smells vaguely of chemicals can be a source of inspiration, but to me it's quite magical. It was late, just before dusk and just before the rain came down, so the skies were thunderous and slate grey mottled with blue and purple and it was very, very still, except for the occasional sprinkle of yellow falling leaves.  A girl on a horse rode by.  The river was full of mallard and heron and many, many black-necked stilt.  The trick was to creep up on them and take their picture before they noticed and took off downstream. The lesser and greater spotteds were less than helpful in this regard, tugging at their leads (usually they are loose and much happier) and jiggling my arm as I attempted to photograph while standing on one leg leaning across the barbed wire.  The rain started to sprinkle on us and I knew we should get going. There was a Hanukah party we'd been invited to. But we walked on just a little further, around the corner near the Disney/ABC building on Riverside drive, on the sandy river path, past an eerily bizarre street light 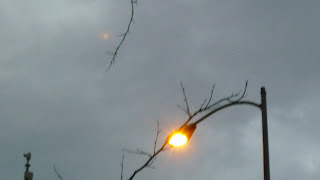 and an elegant, fiery bush, that closely resembled a wisteria 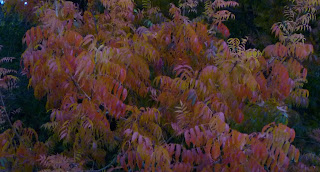 and I thought about my son in upstate New York, with the impending snow, and the temperatures so cold that he can't switch on the laptop, and how beautiful the Hudson Valley is in the winter, and it struck me very clearly that a photograph he took would be so much more meaningful a present than any of the glittering prizes on my list. 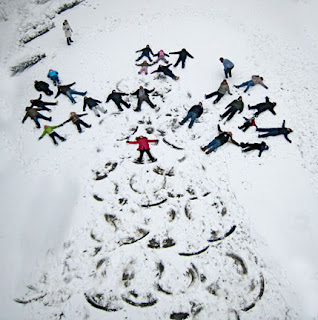 Similarly, on Sunday morning, when we were driving home from Malibu, where Minky had been staying with a friend, and the ocean was just so beautiful that we had to stop (this was prior to getting hash browns at McDonald's, I might add) and take pictures of it. That grey winter sky and the corresponding ocean.  Using her phone, she took this picture 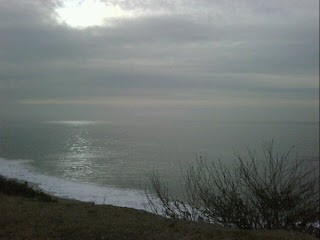 which is, frankly, just ridiculous.

I'm just the kind of mother who would ask her children to learn and recite a poem at Christmas, or practise a skit.  "Why didn't you take part in the talent show, sweetheart?" I asked my rolling-eyed teen. I imagine Christmas with us all around a big piano which one of us, miraculously, has learned to play (beyond the opening bars of the Moonlight Sonata, or the left hand of 'I vow to thee my country' which is just about my limit), steaming mugs of cocoa and merry red sweaters adorning us, belting out holiday songs with great gusto.  Every single shop in Los Angeles is piping in the tuneful stylings of Nat King Cole or Bing Crosby, now that it's December, and it's hard not to be a sucker for those things. It almost makes you understand why people succumb to those dreadful festive Christmas sweaters.  We're already scouting the house for the best location for the tree and I found myself pondering the whereabouts of my shimmering silver tree branch centerpiece. 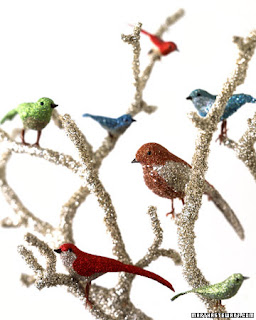 It's all downhill from here, I tell you.

If you want to read something about middle-class Christmas angst, you can't do better than this howler in the Daily Mail.

And if, despite my remonstrations about the frippery of Christmas, you decide to plough ahead with present buying (and won't we all?), here are a few of my favorite Los Angeles stores:

If you'd like to give a gift that really makes a difference to a needy family -- a flock of geese, a camel or a llama --  I like Heifer International.
Posted by Miss Whistle at 12:00 PM

Fabulous post.I didn't click on the Daily Mail howler but for some reason I just know it's the woman with the middle class Poundland shopping trauma,heaven forbid wrapping her gifts with twine from Tesco!!!
hilarious..
BTW couldn't agree more love a hand crafted gift.

Wonderful Post.
I've been Heiffering now for 6 years and would own a small farm if I kept all of the animals to myself. Fortunately, they are in good hands

I have a request. That any book you publish have the Los Angeles river, described just like this, as a main character. I just got goose bumps up my spine. You are onto something. Never mind Chinatown. It was kind of a stupid movie.

Have you every been to @MyMeditation's office? Its walls are adorned with artwork - photos, paintings, collages - from the girls, which she requests as "payment" in return for indulgences they request from time to time. Each piece therefore has multiple stories. and they combine to splendid effect.

Having said all that, a photo AND an urchin vase wouldn't make for such a bad holiday ;).

Can't wait to check out some of the shops you recommend!

Absolutely lovely post. A joy to read, as always.

I have those vases :-) My Mum brought them back from Vancouver for me.

@Northern Snippet -- You are absolutely right about the Daily Mail. My twitter friends had a field day with it!

@legend -- Heiffer rocks, I agree! (And what I would give for a little farm full of geese and llamas in Laurel Canyon - I'm with you!)

@LPC -- I *knew* you would understand! The encouragement is awesome and made me a little lumpy (because that's the kind of fool I am). Thank you.

@Wzzy -- I haven't but I would love to do so. @MyMeditation's daughter are very creative and certainly it must have helped to have be nurtured so by their lovely mamma. The urchin vase is proving rather popular, isn't it?

@MissBuckle -- How kind of your mamma to carry such a fragile present from Vancouver. I do understand. I'm rather coveting them now!