One of the cumulative effects of some time off, or a holiday, that you don't really notice until you're home, is the don't-give-a-damn-ness of the whole thing. I've come back with grey roots which would normally terrify me and sending me dashing to my lovely colorist, Nancy, or have me dabbing a brown crayon over my scalp in the hope that no-one will notice, but looking now at my brown skin, my bright blue eyes, my smile, I realize that I just don't care one iota that I have grey roots. Most people my age have grey hair and so what? It's just fine.

"You're so thin" said my son last night. I'm not thin at all. I'm fat and happy (and at least 15 pounds heavier than the summer my marriage dissolved) but the happy part makes me appear skinny, for some unknown reason.

I've been reading about ego death. Which is odd,  I know, because everything I've mentioned here is about ego - my weight, my vanity surrounding my hair - but I think the point is that happiness pushes ego further and further away. Ego says, I'm fearful, I'm proud, I care what people say, I'm vain, I'm small. A diminished ego says, I love, I don't care what people think, I'm expansive, I'm connected to everything, I'm at one with the earth. Ram Dass, who was a younger follower of Timothy Leary, is a great person to follow on Twitter and Instagram because he reminds you of these things. It was he who said, for example:

“We're all just walking each other home.”

Here is a piece he wrote on the ego, a dichotomy of fear and love.

My friend Katy, a beautiful woman, a party girl in her teens and early twenties,  discovered that she had talents for healing people and works with crystals on the chakras, finds it sometimes hard for people to accept what she does. It's getting easier. The more that she accepts it herself, and the more work she does, with results, the more her reputation grows. She told me that I should make a vision board. "It's very simple," she said, "and I know it sounds a bit odd, but it really does work." (She is lovely and smiley and sweet and hard to not go with her on this one.) "Just put some pictures of things you want on a board and have a look at it every day, keep it in your desk and just glance at it -- it will remind you of who you want to be and where you want to go." And it's true, we get lost, in love, in work, in commitments. As you get into your fifties, life appears shorter and shorter. Even the days shrink visibly and suddenly you want time back, want to grab onto all the moments you can, and make them count. The intellectual side of me wants to eschew the vision board (I think Katy calls it the happiness board). I mean, it's ridiculous, isn't it? But my INFP side likes it, and wants to try it. Why can't we manifest what we want?

"Your blog is DEEPLY un-English" said my friend Giles as we drank a glass of Italian Barolo in my mother's garden on my last night in England. Everyone else had gone to bed. We'd spent the evening eating spaghetti carbonara and looking at his old photo albums, pictures from Oxford, from my wedding, from his trip to California. Pictures of me and Jum (my ex-husband) brown-skinned and smiling and swimming together, kissing in Christchurch meadow, lovely memories of our youth, of being in love as children. We were practically children. It was good to see. I'd forgotten. I'd forgotten how much I loved him, his beautiful face, his California surfer meets east coast intellectual swagger. Those pink, crisp Brooks Brothers button-downs, the way he smelled of soap (Englishmen, then, smelled of whiskey and old cigarettes and wet flannels.) "I mean," said Giles, who still has that oiky accent that public schoolboys assume when they're 13 and lose again when they're 22 but he didn't, "I like it, but" (he doesn't pronounce the "t"; it's more of a glottal stop) "it's not really what English people do, pouring it all out like that." I suppose it isn't. I suppose I should care more about what people think. Or do I accept, now, that I am in fact, slightly mad, slightly nuts, more than slightly eccentric?

One of my sisters mimicked me when I used an American word. I wanted to say "I've been in California for nearly thirty years. Of course I'm going to use an American word." But after her outburst she felt so bad, felt so embarrassed, that I let it go. I know it makes her uncomfortable that I'm not like her, that I do odd things, that my eccentricities are apparent. But what can I do? This is, for better or worse, who I am and I can't reduce it or tamp it down, or behave differently just to fit in the room.

And so we come to the biggest question, the one I've been grappling with. Am I English? Or am I Dancer? Ha ha. Or am I American?

I walk around in this: 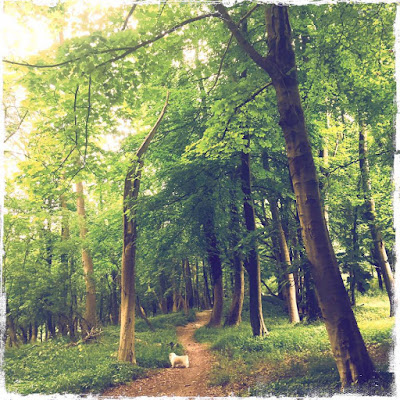 And it connects to my heart, viscerally. It speaks to something deep, deep inside of me. Every anxiety, every negative thought dissipates, and there it is, you and the green-ness. You and the birds, the rustling leaves, the chalk and flint and clay, the smell of the leaf mould. And it's all the same. You're part of it in a profoundly moving way (and I do know that this makes me sound mad, please understand that I am aware how mad this sounds). The whole world is there and you are there and everything is possible. This is what I mean when I say I am English. The chalk is the chalk in my bones. The chlorophyll in the leaves is pumped through my veins in miniscule amounts. My feet walk on soft, dead, leafy detritus, a pillow of organic, rich, ancient soil. It pulls me in and lifts me up again.

It's not the smallness of England that appeals to me, although its smallness is exquisite, it's the bigness. It's the damp, verdant vastness, the layered ghosts, the history, the well-trodden paths, the idea of generations following generations, the cycles of life and death that are in front of your face. Gwyneth, who works at the shop in the village I grew up in, looks exactly the same to me. She must be 15 years older than me but to me, she looks as she did when I was a child. "Do you have pear drops?" I asked her. "No," she said, "I'm afraid not." "Lemon bonbons then" I ventured. "Are you reminded of your childhood?" she said and laughed. "It's funny. I still think of you and your brother as children." I hardly know Gwyneth. I was too scared to talk to her as a child. Now I don't know why. She has a nice face, she's warm, and kind. But she's a witness. She's part of the fabric that witnesses the cycles of life. A fabric that's woven together. It's animal and vegetable and mineral and it's beliefs and traditions and science and math and fragments of stories and ghosts, too, but it creates a fine, gossamer net that holds one. It creates a sensation of being safe.

Los Angeles has the net too. But it's still, after thirty years, not entirely my net. Does that make any sense? I come back to the canyon, and its smells and its familiar golden-brown vegetation, starved of water for so long now. It's been fifteen years of drought. But still, despite this, the wild pink lilies have grown and appeared since I left. I stare at them, mouth open. It's almost inconceivable that something so beautiful could have grown without any water. My brother says that dew plays a part, that plants only need a few drops of moisture to survive. As it is for us I suppose.

You are not mad. You are thoughtful and lovely and filled with the beauty you both lose and find yourself in.

If climate change advocates had lived during the days of Noah they would have blamed the great flood on man-made CO2 emissions.

I salute you! You are probably mad, due to your divorce proceedings, but not English at all (judging by the unexamined outpourings on your blog). I am with your friend here! Onwards and upwards though...

Not mad (at least I don't think so). I feel exactly the same about hills and old stone churches. Emily x

I don't think you're mad at all! Just English and eccentric. Maybe you've taken on some of your adopted country's way of being open and earnestly positive – I love that about America. But it's completely at odds to the us Brits' modus operandi, so no surprise you suffer a bit of ribbing with your old friends.

But again, I don't think you're mad! I love LA and would love to live there, but cutting myself off from this damp bloody island and family and friends here scares me – I think you need to make the fearless jump when you're younger – I really relate to your writing about it. x

I absolutely loved this post - and, no, you are not mad!
I've followed your blog for some time and I really appreciate the reassurance that someone else finds poetry invaluable and allows others to benefit from their intelligent, sensitive and practical prose. Thank you!
(I also love pear drops - same decade as the equally unwholesome but delicious cola cubes haha!)
Cheers indeed.
www.speranzanow.com

You are most def a LOS ANGELES AMERICAN BELIEVE ME YOU FIT IN SUPERBLY AND ARE NOT AT ALL BRITISH ANYMORE! Congratulations, you have lost all of the English that you ever had! You are so LA.