I heard my mother on the phone to my brother while I was making her a cup of tea in the kitchen, "I lost my best friend today," she said, simply. 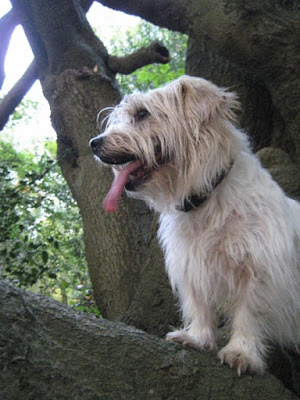 I'm not sure we actually deserve to have dogs. They give us endless, unconditional love, and always seem to be awaiting further instruction. My mother's dog went everywhere with her since the day she adopted him when he was about nine months old and she knew nothing about him other than he had a metal plate in his back leg. A Jack Russell cross (probably with a Yorkshire Terrier) he was white and brown and funny and sporty and mischievous. His name was Tiny, though his personality was bigger, hence the name Tony, coined by my brother. Every day, until about two months ago, when she broke her ankle, she walked him down the drive, and every morning she gave him a saucer of milk. Lately, he developed dementia, forgetting who he was, or where he was or whether indeed it was day or night. He died this morning in my arms, in the hands of a lovely vet named Louise. My mother made the decision yesterday, six days after his sixteenth birthday, and I found her in tears (she is Norwegian; she rarely cries) after she'd gotten off the phone with the vet. "It's the right decision," we said. But even then, with this responsibility to choose for our dogs whether they live or die, or how much of life is actually living and whether that percentage makes sense, and if the fact that he wagged his tail is a sign that he's okay, and the skin and bones he'd become, and the fifteen minutes he spent trapped under a chair because he couldn't find his way out and he is blind and deaf although we still call his name loudly in blind faith, believing he still may perhaps hear something, and the special food you give them so that a miracle might just occur, and the time you nearly gave him a heart attack with a well-inentioned bath, and that terrible haircut that made him look like Rod Stewart, and the way he always knew where my mother was...even then, how can you not doubt your decision, your moment where you have to play God. "You have done the right thing" said the vet, again, as we waited. She was very kind.

This is the last bastion of my mother's independence. A creature, a funny little chap, a good, good doggo, who depended on her for everything. I am so very sad for her.

I told him what I tell all my animals when they are dying, that there will be a green field, a very sunny one, filled with other good doggos, and rabbits to chase, and the sun will always shine, and there will be a clear blue stream of the most delicious water in the world, and plenty of food, and there will be no more pain. And I asked God to take care of him too, to give him a bit of extra attention because he really was an extra good doggo.
Posted by Miss Whistle at 6:03 AM

My mother used to say that if her dogs were not in Heaven waiting for her, then it wouldn't be Heaven and she wasn't going there. Calling the vet is the last kindness, but how hard it is. I'm so sorry.

Thank you, Z.
Yes, your mother is right.
That's the heaven I'm looking forward to.
Thank you for your comment. Much appreciated xo
Miss W

Dogs are family who love us unconditionally. We take them in knowing they will probably leave before we wish them to, before we do. Calling the vet, and helping them change worlds, in an act of love. I am sorry for your mom's loss, for your loss, and for your family's loss of Tiny. Sending you love as you grieve.

Sorry about Tiny... I am glad your mom has you, and you have her, to help each other through this tough time. You did do the right thing, and the right thing is often the hard thing. Sending hugs.

Such a moving and sad post - I am very sorry for your loss (and your mum's of course) and it really is a massive loss to lose a pet. I am glad that you were there to the end even though I know how wrenching that is as I have done it many times myself.
Take care and sending hugs your way.