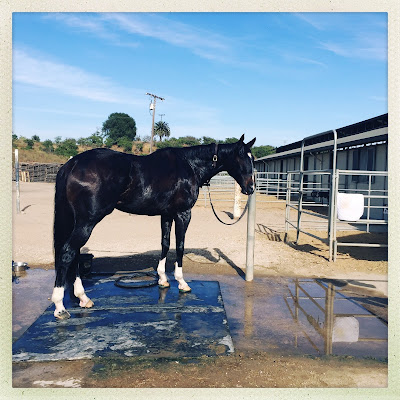 I got the call from my vet at 7.20am. His was the second opinion I'd been waiting for. It's not good news. Not at all. Horses with a neurological disorder are rated on a scale of 0-5, 5 being worst. His is a 3, taking into account that he falls to his knees often (while grazing, but, interestingly, not with me on his back except once on a particularly vertiginous cliff side path in the Angeles National Forest). However, because he falls and because they think the condition is worsening, the vet doesn't think it would be fair to keep him at pasture. That and the fact that we don't know how much pain he is in. In addition to his nerve endings being shot, there is a possibility of osteo-arthritis. And again, because he was trained to race, he may have fallen and broken his neck. Clearly the neck is at issue here; he sets it and doesn't like to move it far from where he sets it. Asking him to bend, which we've been trying to do, is almost physically impossible for him. So this morning, in the cold grey light, I heard the very worst news. Sitting at my desk, naked, because I'd leaped out of bed to get the phone, and shivering, and trying to sound like a grown up with the vet. And everyone has been so incredibly kind and sweet and supportive, but we have to choose what's right for him, and that, according to the opinion of two vets, is not to live in a happy green pasture for the rest of his days, however long them may be. The vet comes on Saturday in the morning to put him to sleep. And my heart is heavy.

There is no doubt that I was in shock when I wrote that last post. My lovely man, who is kind and good and gentle, told me to go home and write about Jelly and that's what I did. I think about all the things I do when I think about my old dogs that have to go; that there is in fact a grassy green field in the sky, filled with trees and birds and sunlight, and a nice little stream of fresh water, where they can frolic forever. It's not the same with a young horse. He's still a baby. It seems grossly unfair. 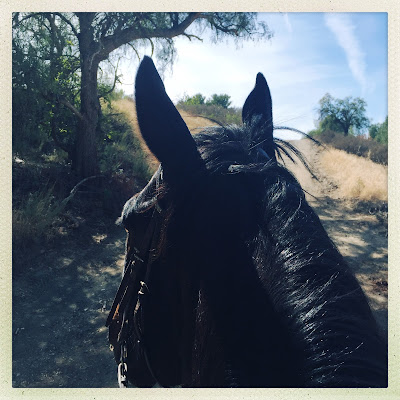 You know, I had a dream that we'd ride across America together. I was inspired by the book "Last of the Saddle Tramps," the true story of Mesannie Wilkins, who, at 63, with a year to live, set across the country from Maine to California with her horse and dog, made friends along the way, and ended up on the Art Linkletter show.  As we wandered through the National Forest, or traipsed through streams, I'd tell him about it. I'd imagine him as a pack horse, with our food and bedding and tell him we'd camp on the beach and swim in the ocean. It's nuts, I know. But he's the kind of animal that inspires that kind of thinking. He is so brave and so bold and will do anything I ask of him, just because I ask it. I know he loves me, and that's why this whole thing is so bloody hard.
Posted by Miss Whistle at 12:41 PM

Thank you so much. I so appreciate your kindness. xo

You love him so much.

There's no doubt at all, that our pets receive our pure love, because they give it back in bucket loads. That's why it's such a cruel, hard decision to make, and so sad.
You just have to tell yourself that he trusts you to make the right decisions on his behalf, while he is in your care.

Thinking of you both.

Oh, I'm so sorry. I will be thinking of you and Jelly all week and sending special love on Saturday.

So much love to you, Bumble, so much love. I'm sorry to read of the verification of Jelly's diagnosis; sorry for the necessity of your hard decision; and deeply sorry for the reality of your painful loss. I think the greatest gift we give to our animal companions, in thanks for the unconditional love they give us, is helping them move painlessly from this world, surrounded by love and calm, when we know the time has come to let them go. It is a horribly difficult act of great love. Sending you support and understanding. Thinking of you and your brave and beautiful Jelly. xo.

Companionship, unconditional (not always if carrots are around) love, trust, exploring remote places together are all things horses give us. We give them a place to live, plenty of food, lots of laughs and/or tears together with all our secrets. Jelly sounds like the horse everyone wants and loves. It will be the bravest dissision you have to make for him; but to remove his pain is your final gift and hug to him. My heart hurts for you it is such a huge loss to you. Be brave for Jelly and love him to the end, he will always be in your heart. All love Charnie

I wish that I had something better to say than "I am so sorry for this. For your pain, for Jelly, for your comapnionship." It has been a while since I have checked in with your wonderful writing here and I am stumbling on this very sad news. Having grown up with horses, I understand this impossible decision and I remember that lean. I may not know either of you but I am sending Love and Strength nonetheless in spades.

Sitting at my desk at school reading this. It's a cold, grey day outside and students' voices echo in the corridors and tears roll down my cheeks. Oh so sad, Bumble. I am so goddamn sorry. It's one of the hardest things to do. Sending so much love to you and pats and apples to Jelly The Magnificent all the way from Tanzania. Thinking of you and especially tomorrow, being Saturday. Fly high Jelly boy. XXXXXXXXX

So very sorry - there are really no words sad enough for this. Damn.