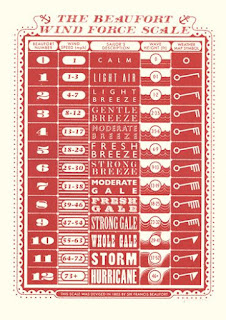 When I was quite small I remember being rather taken by the Beaufort Wind Force Scale. In our text book there was a beautiful pen and ink illustration of the damage done by varying degrees of wind force, from wind blowing through a few leaves, to whole tree trunks lying on the ground. "Observe" said Mr Williams. "Don't just look." And so through observation, you could surmise the strength of the wind on that day.

Storm Doris (my mother came over and announced triumphantly "It's Doris Day!") has strewn trees and branches and twigs all over the paths around us. Frantic emails to the local grapevine include information about power outages, fallen trees blocking paths, wobbly rooves and errant big cats. Yes, I adore the local email grapevine. It's full of the most useful tidbits about the village, or the group hamlets, known as the Hilltop Villages. Imagine a sort of Perez Hilton sans the bitchiness, for rural Buckinghamshire.

It's raining again. I'm trying to be cheerful about rain. My house is cozy and I have tea and soup and books, but it is raining again. Therefore: mud. Mud is part of my lexicon and my outfits; smeared over boots and socks and leggings. This is why the mud room was invented. You cannot get away from the stuff. The dogs have become very obedient. "In your bed" said in a semi ferocious voice after a walk is implicitly understood.

But back to the Beaufort Wind Force Scale. Imagine if something like that existed for the state of a relationship? Small, subtle signs to indicate what was going on. Takes phone calls mid conversation? Category 4. Answers in monosyllables? Category 5. Doesn't answer: Category 6.

It was a big step to move to a village in England to live with a man. Fingers crossed that all is well.

Ha ha ha! Yes, LPC, I am more than okay. I was just obsessed with the Beaufort Wind Scale! xxxx