Thistle is staring at me while we wait for the kettle to boil. I've tied her to the Aga so that she doesn't try to bother my mother's elderly dog while he has his morning saucer of milk. He is very, very old and very, very frail, and I know that she intimidates him. This is his house and we have taken over, while caring for my mother, and he is confused about the whole thing. On the 4th of June, it will be sixteen years since she adopted him, at three months. And the 4th of June is exactly three months after my late father's birthday on the 4th of March, so there is some magical thinking here, about the link between the dog and the man who were, perhaps, born on the same day, and this somehow makes the whole conversation of whether or not he should be put down so much harder. It's not my choice, I know, but it's hard to watch this poor, skeletal creature wander about confused. He's not the dog I remember or the dog who would leap up at me when I arrived from America, imploring me to take him for a walk, and who would happily climb huge tree trunks so I could take pictures of him. He is very sad and confused now, and shakes when Thistle gets near him. He is blind and deaf and hates being touched, though I have cut great clumps of goop out of the hair around his eyes. He eats well, and he loves his milk, but other than that he sleeps, or paces the wooden hallway in the middle of the night, his long nails clicking on the boards. I don't like conversations about death or whether we can dictate who should die. What authority do we have? Or is it our responsibility? 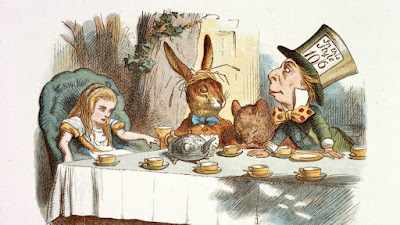 There is an infestation of glis glis (edible dormice) in this house. And so it has been for as long as I can remember. And so it was in the house we grew up in, just a few hundred yards away from here. Glis glis were released into the wild, possibly by mistake, by Walter Rothschild at the beginning of the last century in Tring Park, only a few miles from here. As a result, the whole of this part of the Chilterns is awash with them. They're awfully cute, furry little creatures, with huge brown eyes and a little bushy tail, fat and cuddly, and like Alice in Wonderland, they sleep a lot, mostly during the day. People have been here to "control" them - the last man would catch them in traps and drive them a few miles away to release them into the wild (but my inkling is that they are rather like homing pigeons and probably just journeyed back, with their little rucksacks and bandanas.) But as with any house with two families living in it, they don't always respect our space. A drawer for knives and forks has become a cozy cot because it's next the Aga, and it's even more cozy now that the knives and forks have been closed into thick, sealable plastic bags (and washed again before use because I am so squeamish). A linen cupboard is a whole dormitory. A drawer filled with wrapping paper and ribbon is a makeshift nursery.

A trap was set last night and one pitiful soul has been caught, lured in by the promise of sweet apple. He is still in there and stares at me dolefully. I'm not sure I can let Thistle have her prize again today. One day was enough. (Yesterday's victim was savaged on the lawn as he made a run for it and he did quickly after a vigorous shake.) I'm not sure that picking one or two of these creatures off and murdering them does anything to the overall population, does it? My mother tells me that she can wring a pheasant's neck easily and without thinking about it because she is so used to it. I tell her that I can't even squash an ant. I don't like death. I try to save everything. And I am now mourning that poor little brave glis glis as it ran for its freedom across the lawn. My sisters will laugh at this. They are more of the stuff and nonsense generation; they will think me weak and too Californian and borderline Vegan. I just don't like it a bit. I wish we had better rehoming options.

So now there is one dead, and one in a trap sitting outside the door, and there is another asleep in the knives and forks drawer. There are also at least four in the roof above the bedroom, because they got the band back together last night. What to do? 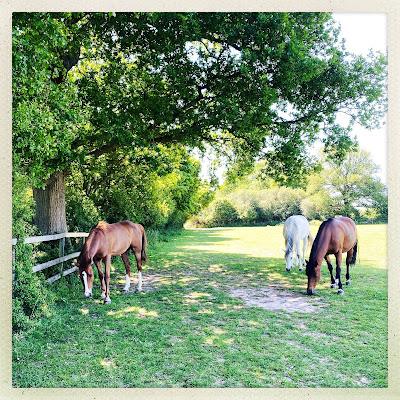 Meanwhile, we walked about eight miles yesterday. Charlie wants to talk. I am content just looking at things, being swallowed up in it, meandering through it like a swirl of raspberry in ice cream. There is not a more beautiful time of year; lambs and blossom and swallows and finches returned from Africa, daisies and buttercups and wild pink geraniums, fat horses grazing under oak trees. The greenest of green greens. Softly wafting clouds. The sense of things being okay. Time has stopped and yet there still isn't enough of it. I find myself wanting to learn about the migratory patterns of birds, circadian rhythms, the language of trees, Wilding, understanding the ecosystems of canals. We saw a swarm of bees in a tree by the Grand Union Canal, and later, in Aldbury a beekeeper in his garden. Two mini donkeys. A monster patch of rhubarb with stems as thick as my wrist. I want to absorb it all. But then, lingering at the back of my mind, constantly, are those words: Are You Sure You Have Anything To Say?

One question: "edible" dormice? Edible? For whom? And if they are an endangered species (as the Daily Mail claims) then why advertise them as "edible"? I'm thinking it would take quite a few dormice and a lot of effort catching them to make a pie...
Also, are they maligning other types of dormice as being "inedible"?

All I can think of is Alice in Wonderland!