Ena Sharples and the H-h-h-heat

The kind of heat we're experiencing in LA is what they euphemistically call "unseasonably warm." It's 107F, ie hotter than bloody hell. This is what we expect in September -- not June -- when the dirt is brown and brittle from the long, parched summer, when walking out into a hairdryer seems to be the seasonal norm, the tradition. It reminds me of being barefoot and pregnant and standing in the sprinklers at 9pm at our rental duplex on Harper Avenue, opposite where Ellen used to live when she wasn't famous. Oppressive heat makes you grumpy. You have to get into your car and turn on the AC (or Air Con, as my lovely English boyfriend calls it, which makes it sound frightfully grand) and then walk away for five minutes before getting in. I've got one of Jelly's white cotton saddle pads on my seat so I don't burn my bottom. And I'm pressing the MAX AC button, which I've just discovered. It's the kind of heat that makes you want to slap tourists who are smoking on Hollywood Blvd as the hot air rises from the pavement. How can you smoke in when it's a million degrees, you wonder. It's the kind of heat that makes you grumpy with Waze, and makes you tetchy in traffic when you're usually calm -- the kind that makes you lose any semblance of patience. It's the kind, too, that makes you want to lie naked on the dark grey slate in an air-conditioned bathroom and wave your arms in pretend snow angels.

And the fires are burning. Santa Barbara. Asuza. Duarte. The 2 Freeway. More. Thinking about the firefighters in all their gear, courageous, strong and sweltering.

The heat makes me want to swear, say things like "ballsing hell."

To make matters worse, I had a passport picture taken today. "You look like Tilda Swinton with a round face," said my son, cautiously. "Don't smile" said the lady at Photo One on Santa Monica Blvd. "The British Government don't like smile." And so my mouth is wiggly line, like Snoopy's mouth when he's embarrassed. 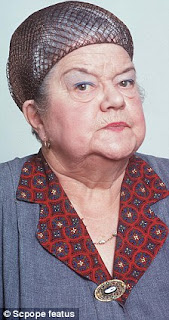 In my endless quest for a red lipstick I can wear, I bought one from Nars, a crayon, Cruella. My Girlfriends Who Wear Red swear by it. I put it on and look more like Ena Sharples than Angelina Jolie. I give it to Monica, who of course looks like a bombshell in it.

I want to throw myself in the Oslo fjord, in the salty seawater and put my head under and gargle it and swim and swim till I'm tired. I want the fine rain on my face, the miniscule raspberries that grow by the roadside, the yarrow and wild ox-eye daisies of our magic island.

Oh and four gun control bills were defeated in the Senate. Lily-liver'd, spineless fuckers. So, yeah, it really does feel like hell here.
Posted by Miss Whistle at 7:05 PM

Your writing is perfection. Lou x
p.s. it's raining here and yesterday made me think of the Carpenters song : 'rainy days and Mondays always get me down.' it was both. But deadly heat no better...
And I am so sorry about your loss. Wretched.

It's true. Your writing is sublime.

It seems as though the summers here in Australia have been hotter than usual the last few years and at the moment, winter is in full swing here and somehow that seems to be a bit over the top too.

I have thought often of you in the last few days about your ghastly situation with your beloved Jelly. It has been just three months since we had to make the same decision with our beautiful boy, Piper the Labrador. When I put the key in the door to come home, I still expect to see him waiting at the door with a big open mouthed smile and a waggy tail, greeting me, but alas the house is quiet. I feel for you.
Best wishes,
Deborah - Melbourne.