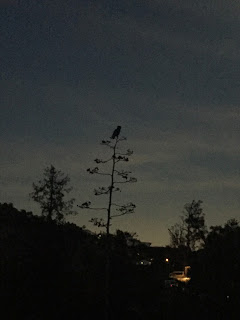 My sweet boy died this morning at about 10.20am. The vet, who was young, and had just de-horned a steer, told me that there are two things we can do for our animals 1) Give them a good life and 2) Allow them a dignified death. Jelly had both. He was the best adventure partner a girl could ask for. Every weekend was like summer camp; climbing mountains, jumping ditches, fording rivers, galloping through streams, meandering through tree-lined paths studded with deer, coyotes, and the occasional mountain lion.

Last night I walked through Whole Foods after an event at the Paley Center, and had to hold back the tears as I put bags of carrots, small Fuji apples and granola bars into my basket. It felt so significant, somehow, Shopping For The Last Meal. I got up early this morning and drove out to the barn to see him. I gave him a bubble bath and rubbed behind his ears and scratched his face with my fingers, and fed him his treats and let him graze a little and warm off in the sun. Then we led him down to the turnout arena with the soft sand footing, and he was given two shots while I held him and told him what a good boy he was. He fought falling to his knees but finally capitulated and lay down. I put my arms around his warm neck and told him I loved him and that it would be okay and that there was a happy place with endless supplies of grass and friends. He was calm and sweet and soft and then he was gone, and this big, warm brown body lay in the dirt, with all the energy sucked out of it. I put my head on his neck and wept. And Vince, the lovely Mexican American guy who runs the barn gave me a hug, and the young vet held my hand, and Liz, who's been helping with Jelly, hugged me too, and the dogs sat at a respectful distance, uncharacteristically, just watching. I'm glad we did it somewhere soft. I didn't want him to hurt himself.

I took a quarter of his tail as a keepsake, any more seemed undignified. And I took his halter with his name on it, and at home, I lit candles, and put up a picture on the little altar, next to his tail, and said a prayer and told God to look after him because he is a very special person, a friend.

So much love. So much love and kindness pours out when these things happen, from friends and acquaintances, and even people you know hardly at all. So much love exists in the world, and there it is, magically appearing when we need it, flooding over us, a warm bath of it. There are flowers, pink and orange and red, and phone calls, and text messages, and the most eloquent expressions of sadness and support.

The tragedy is that he was so young. Just six, still considered, honestly, a baby. "It's such a cruel disease" said the vet. I think I was sobbing unashamedly at this point, and uncontrollably. It's unbelievably cruel.

But he saved me when I really needed saving. And I saved him when he could have just been cast aside (ex-racehorses don't always have a dignified or comfortable life, or any life at all, after racing). And we took care of each other, like the Famous Five, although there were only three of us (Bean came too, on our adventures) and, to be honest, he wasn't a huge fan of ginger beer, or egg sandwiches.

And tonight I walked out on the hillside in Laurel Canyon, as I do each night with the dogs, so that they can pee and snuffle around, and there was a big blue moon and I knew it was for Jelly (apparently I turn into Cher in "Moonstruck" at these moments. And I sat down in front of my favorite asparagus tree (agave americana) and an owl landed right at the top and stared me down. He was there for about seven minutes. I switched off my flashlight and put my phone away so it was just me, the moon, the owl, and the dogs, sitting quietly, and the occasional hum of a passing car in the canyon. Maybe I've read too much Harry Potter, or maybe I'm too much a fan of shamanistic tales, but that was a sign, that all is well, that Jelly has gone over to the other side, where he is galloping in miles and miles of glorious green pasture, feeling free and warm and surrounded by love.
Posted by Miss Whistle at 9:48 PM

Oh I was thinking of you this morning. I read but don't comment but just wanted to let you know.

Ah dear Miss Whistle how good you are, how brave and loving for your dear Jelly. It is so hard to say that goodbye, to see the end of such beauty. I am in awe of how much our hearts can take, how battered and broken and expansive they can be, how sweetly they can mend and beat on when that seems almost absurd. You are right. The universe sent signs of goodness and comfort. And you were a true friend to your horse, his light through darkness.

It must have been just awful. Love and kindness to the end, he had a good death, if one can say such a thing, but how very hard for you. Love and best wishes.

Dear Bumble: I've been thinking of you all week. Thank you for this post and for sharing your vet's thoughts on giving animals a good life and dignified death. When one thinks of the horrible life Jelly might have had one feels very grateful that you two found each other. You lavished so much love, care and companionship on Jelly, you gave him a wonderful life. In her movie, "Heart of a Dog," Laurie Anderson speaks of the "connection between love and death. And that the purpose of death is the release of love." You gave all you could to Jelly, your last gift, in granting him a dignified death and the "release of love."

Whether these moons are truly magic or not, we can't know, but the imagination and the love, yes magic.

Oh my gosh, this made me sob just now...and I don't even ride horses. But the love, I know that love. And I know allowing someone...whether a pet or a parent... a dignified death. The toughest feeling, yet such a privilege too. Your writing is so eloquent and a joy to read.